Following our usual pattern, we left the ship at a reasonable time and went for a walk. Or hike, depends on how you look at it.

(Note, I wanted to go to El Corte Inglais, only 1.5 miles from the ship along a major road. No sweat, right? And no joy either since they no longer had the notions area that I remembered from years ago, Too much to ask, right?)

Anyway, it seemed like a much better deal at that point to just walk around the old city as being a whole lot more interesting that the new portion, even if the suspension bridge is terribly long and a joy to behold.

Cadiz is one of those historical cities that one feels obligated to visit. Dating from the Phoenician times, it claims to be the oldest continuously occupied city in Europe. Certainly it has changed hands numerous times over the years with all the various groups, invaders, and occupiers contributing to the architecture.

The old city is dense with narrow streets, few of which allow any motorized traffic. There is the usual variety of shops, from clothing to jewelry to shoes to food stuffs, alcohol, coffee, tea and the ever present tabac.  We went by the Central Market. It is primarily food stuffs (being too early in the day for any of the taverns, bars, or restaurants to be open). Even so, I would say that less than 20% of the stalls were occupied. 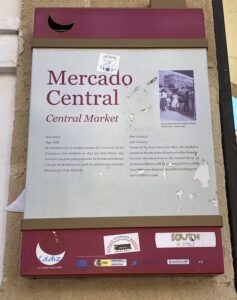 After several detours and a wander or two past cathedrals, convents, and public buildings, we made our way back to the ship (only stopping to test out the free wifi in the port which was markedly better than what is on ship, but so slow anyway…