It was a busy day. Alex was seen by Ortho who scheduled him for surgery next Wednesday. Even better – they think they might be able to put him into a boot by two week after which means that he could be at least partially weight bearing. And that is not an insignificant benefit. Dani also took all three dogs and Alex home last night. We are going to see how well the downstair there will work for Alex on crutches. I would rather have him home, and drive out to lend a hand while Dani is at work than leave him in transition forever.

I am just 150 stitches short of finishing the Fox – 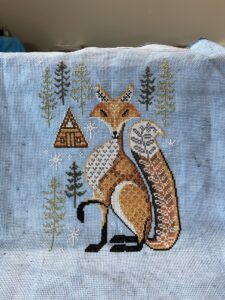 All that is left are white snowflake type items. 17 small and three large. I counted. Once it is finished, I can move on to the Swan (Feb) hopefully before the end of the month.

Also related to February is From the Hearts Monthly Quaker. 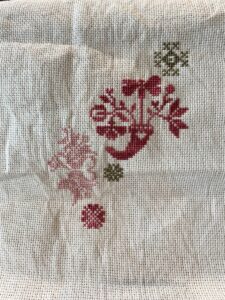 I was able to stitch almost all of the large dark pink plus the upper green small quaker while at the game. (More about the game at the end).

And then there is the Zodiac series which I completed the monthly portions last year but sort of had planned to stitch the frame as I went, and then didn’t get there. This was followed by trying to decide if it really needed the frame. After today, I think it is obvious to me that I am going to have to stitch the rest of it. 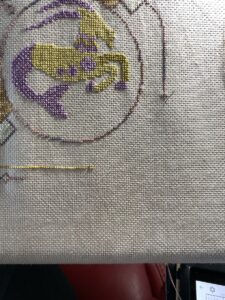 I have two choices; pick out the portion of the frame that I have completed so far (about 3k worth of stitches) or just stitch the rest of it – about the same number of stitches.

Looking at it, I need to finish. 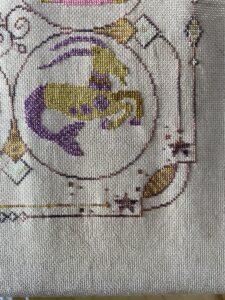 which leads me to the last bit – the bit about the game. The Washington Huskies were here today (which means that they should be playing Stanford on Saturday). The Bears held their own through the first quarter but fell significantly behind in the second and third. After clawing their way back to a tie in the last few seconds, fouls and free throws handed the game to Washington. Literally down to the last seconds. The Washington player missed her two free throw attempts, but Cal managed another foul in the scramble for the rebound. The second of those two free throws won the game as Cal couldn’t get a basket with less than two seconds to go.

The last home game is Saturday. I am hopeful that George will have recovered enough from today’s dental treatments to come to the game with me.