This commentary is brought to you by the miracle of too much coffee… Anyway. For those of you who are not US the following may be interesting. Everyone else, feel free to skip down several paragraphs.

The background of Black Friday stems from the US retail industry which, on the Friday after US Thanksgiving  finally saw enough customers and sales to transition their year from being in the red (loss) to being in the black (making a profit). The trend was helped by the fact that most other US businesses give their employees that Friday off work. Traditionally as well, it was also the first day of the Xmas holiday season. New decorations, people shopping for presents on a day off etc. Over the years the “Black Friday” has evolved into competing sales and attempts to lure in people with their money. No longer restricted to retail stores, the practice with the accompanying sales has extended into the on-line sales community.

As it turns out, the phenomenon has also snuck out of the US and into Europe. I can’t speak to other areas of the world. I find it extremely disturbing to find “Black Sales” and “Black Friday Sales” signs in the windows of shops in Spain, Portugal, and the Canary Islands. None of the shop personnel had a clue as to what it meant, just that it had become a “thing” in recent years.

My email has been bombarded with sales and offers. It might be a chance for a merchant to clear out stock that hasn’t moved, but really – that discount might just leave them in Red November.

On to other things – we docked just after lunch in Funchal, Madeira. Unlike the last time we were here, the sun was shining. So much so that I completely ignored the fact that the clouds floating by had rather dark underbellies. I didn’t bother with jacket or take an umbrella. Just walking into the town to see if I could find another notions store (no, none were tourists could easily get to) and to find some magnets. No, I don’t need any, but it turns out that crew members on this ship collect them. My favorite barista hasn’t managed to get off ship in the last couple of ports. It was easy enough to snag some in one of the souvenir shops.

And, I didn’t get too wet considering that the light sprinkles started just after I left the port. 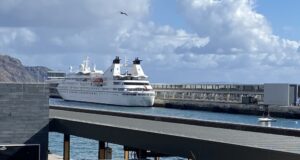 and a view of the Star Legend from the city.

otherwise, it was stitching this morning and I am now contemplating a nap before supper…