After spending more time in both Green Room and the MidAmeriCon table I was ready for a hike. Concert in the afternoon then out onto the Green Line (or Red or Blue, from the hotel they all go downtown).

The Eldest had been scouting out the area for the last couple of day and had found a couple of interesting places to eat. I wanted to stop at Mountain Hardware. I rapidly discovered (which should not have been any kind of surprise at all) that the catalog carries far and away a better choice selection than the story. The two young guys however were impressed that my fleece tunic from them had traveled in over six countries this year. So they gave me a mug! 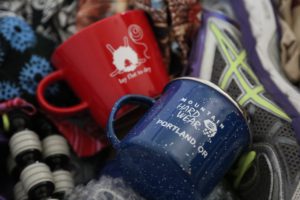 which I happily will take home along with the sheep mug Shana had found in one of the local fiber stores.