On Tuesday mornings, I have been meeting one of my neighbors for coffee and a walk. The coffee is picked up from Peet’s and we have been hiking around various streets and neighborhoods here in the Berkeley Hills. The variety of houses is just amazing. Many of the streets are winding and, as you might have guessed from the name – it can be pretty hilly. Not as in up and down but as in UP or DOWN.

When you get to the other side of Marin from where we live, it gets interesting  from a geological perspective. I will insert some pictures of Indian Rock (huge rock formation) probably next week since I don’t have any good ones from today. But back to the terrain. There are a lot of huge chucks of rock. As in protruding from the ground in front of people’s houses taking out a large chunk of their front garden. Large enough to obstruct the view from main floor windows.

I don’t think today that the city would even permit to build in this area, but the first half of the last century, I don’t think any one was quite as fussy.

The residents of one house have a sense of humor. What do you do when you have a huge outcropping in your front yard? 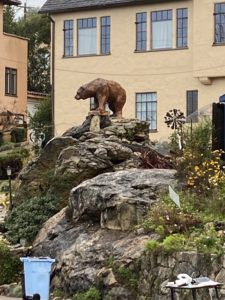 actually, not doing a dumpster dive

why, you place a statue of a golden bear. Not a small one nor light weight being solid metal and bolted on.