Or at least the Oakland A’s. Today was the third and last of the three day Battle of the Bay between the A’s (my team) and the San Francisco Giants (those stuck up folks from DotCom money). Shall we just say that money is a factor? So the A’s didn’t have the best showing in the world for the last two games and none of us really expected they would do all that well today.

Hope maybe, but expect? Nah. Final score was 6:3 with more players rotating through the field that I have ever seen in a game.

So instead of whining about a couple of my favorite players no longer being with the team, I will instead discuss headgear.  I decided I needed a choice 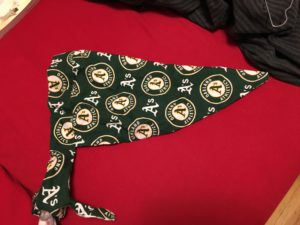 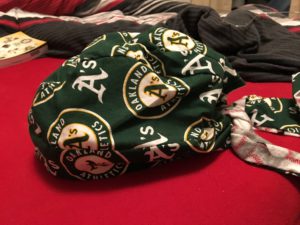 looks like a standard OR cap with a tie added

made out of the same fabric. Sewing these was part of yesterday’s entertainment when I figured out that wearing a ball cap just wasn’t going to cut it. Wearing the cap? Yes, Taking it off for the National Anthem? Necessary but not going to happen. Hats come off, scarves and turbans don’t.

Of course, I was not the only one sporting decorative head/head gear. 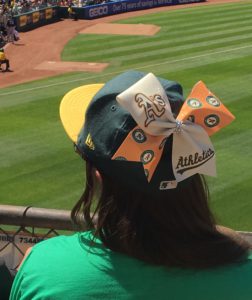 with a lovely sparkly bow 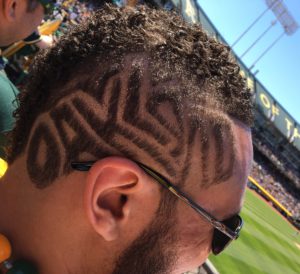 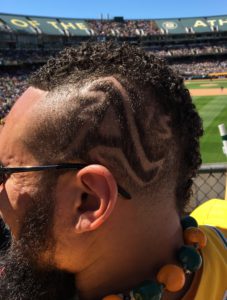 Haircut for the obvious reason. He has this week off work so won’t have to get non-baseball fans opinions for a few days.