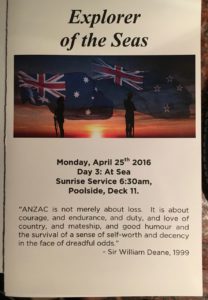 is the 25th of April. In WWI that is the date that Churchill – not beloved of anyone on this side of the equator made a totally stupid military move involving primarily colonial forces landing on a beach overlooked by rested, well armed and willing to fight forces from the Ottoman Empire. Unlike D-Day of WWII where some special ops types went in ahead, others parachuted and there were key German locations unmanned – this invasion was a total disaster, became bogged down for ~ 9 month before the Brits decided to cut their losses (again – note mostly Australian, NZ and other colonies). The retreat wasn’t a slaughter simply because the Turks elected to let them withdraw without a massacre.

Most of the survivors still fit to fight were transferred to the Somme…..

Anyway – this particular day became ANZAC Day – for the Australian, New Zealand Army Corps and holds the same place in the hearts of their peoples as Memorial Day in US (without all the commercialism). The fallen of the wars are remembered.

Unlike some of the other ships I have been on – this was a well organized, well thought out and executed dawn service. There was a printed program, poppies for everyone who hadn’t remembered their own, and coffee. Other years, there has been a small group self-organized on deck at dawn. This year there were hundreds attending.

They shall grow not old,
as we that are left grow old;

Age shall not weary them,
nor the years condemn.

At the going down of the sun and in the morning,
We will remember them.