and the storm rolled in

there was a huge storm that rolled through on New Year’s Eve which dumped an incredible amount of rain, caused a lot of flooding with winds that added damage for good measure. The only good thing that came out of it, as I mentioned before, was the lack of fireworks.

There was another “bomb cyclone” as it is being called as part of an atmospheric river predicted to hit the area starting about 1000 this morning.  All my initial plans became OBE due to weather concerns. Naturally, the roads were clear, there wasn’t any rain, and I wondered. Ran errands for most of the day, finally getting back home just before 1600.

And by 1700 the storm had rolled into my area. Both the wind and driving rain seem a lot stronger than last weekend. Slight lull after the first few hours, but we are back at driving rain with winds continually changing directions. Glad to be tucked up in my cozy chair.

I have been making steady progress on the Fox&Rabbit 2023 Royal Gardens Mastery SAL. After 4 days of stitching, my 3900 stitches puts me at 42% complete… 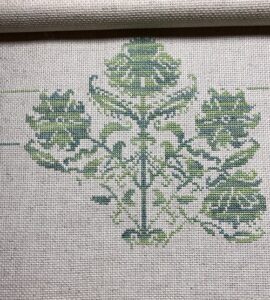 fiber person - knitter, spinner, weaver who spent 33 years being a military officer to fund the above. And home. And family. Sewing and quilting projects are also in the stash. After living again in Heidelberg after retiring (finally) from the U.S. Army May 2011, we moved to the US ~ Dec 2015. Something about being over 65 and access to health care. It also might have had to do with finding a buyer for our house. Allegedly this will provide me a home base in the same country as our four adult children, all of whom I adore, so that I can drive them totally insane. Considerations of time to knit down the stash…(right, and if you believe that…) and spin and .... There is now actually enough time to do a bit of consulting, editing. Even more amazing - we have only one household again. As long as everyone understands that I still, 40 years into our marriage, don't do kitchens or bathrooms. For that matter, not being a golden retriever, I don't do slippers or newspapers either. I don’t miss either the military or full-time clinical practice. Limiting my public health/travel med/consulting and lecturing to “when I feel like it” has let me happily spend my pension cruising, stash enhancing (oops), arguing with the DH about where we are going to travel next and book buying. Life is good!
View all posts by Holly →
This entry was posted in Cross-Stitch, Home. Bookmark the permalink.

2 Responses to and the storm rolled in