For almost everyone of us who were ever stationed in Germany, Augsburg is at least a bit familiar. Located along the A8 Autobahn between Stuttgart and Munich it was an easy stop on the way to the mountains, Oktoberfest or Austria if you had a car full of bored children. Obviously, there was also an American military presence, so many of us called it home for three years.

That bomb, now lying in isolated splendor on the grounds of a future underground parking garage is covered by a white tent. Both to protect it from the elements and, I seriously think, stupid people who might just think tossing things or attempting drone fly-byes would be interesting. Not.

It is thin skinned, and is mostly the 1.5 ton of explosive with a more than adequate central well to make the maximum distribution of force. I’m following the story both from emails and The Augsburger Allgemeine on line. The information being provided is amazingly complete. Some of the questions being posed by the public are not so…. I can’t help but wonder about some of the people.

Why would they want to put this off for a week so that it doesn’t disturb your visiting relatives? It was one thing the bomb was buried and not disturbed, another when it is sitting on the surface. Yes, there are people in the 1.5 km radius who don’t have Internet. So what? Do you really think the Police and Fire Departments don’t have the location of everyone legally in the area? This is Germany; everyone has to be registered. Do you really think “we” never had to plan evacuations in the era before the Internet? How about Storms and Floods? Locating everyone is part of standard emergency planning; it is part of what the Emergency Response people do for a living. It is why Sunday’s are better than weekdays for such operations: fewer people, less economic impact.

Never mind this is the single largest evacuation in the country since WWII. Can 2500 emergency response professionals handle 65000? Probably. Unlike a certain segment of the US population, Germans have lived through wars/bombings in their home cities (or their parents/grandparents have). They are not going to claim a right to die in place defending “their stuff.” The city officials are also making it clear that not leaving risks life, limb, and 1000€. I would doubt that riots and looters are going to be a significant issue.

Part of my update comes from our intrepid on-scene reporter (and responder), the rest from on-line news.

Compared to all of that, my life is calm. Some of the day was spent in the car. Dental care for one of mine. Ransoming sewing machines that were in for service. The first involved driving to Walnut Creek, the second to Dublin (not Ireland).

Otherwise – in a surprise move – you are getting a 2 for 1 picture. I finished another Exeter Hat and have just the last few rows to go the cross stitch 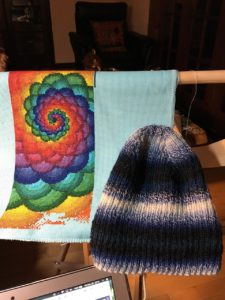