↓
Home→Sports→Basketball→and more of the same

but if one takes enough meds – well, the ability to care, much less make sound decisions might just be a bit impaired.

Which is why I found myself at the Cal Women’s Basketball this afternoon. The game was a reschedule with Arizona (COVID) and, as of last evening, cancelled and would not be rescheduled. Once again, the issue apparently was with the Arizona team. So any of you bright people want to believe that giving up masks, eating out a lot, and taking strangers hands to stand in a circle singing “Kum-ba-yah” … well. The pandemic is not over. 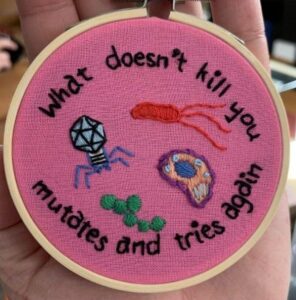 Back to the game. Game is scheduled. AZ is not playing. At 0400 in the morning CALState LA decided that it was worth a drive north for a chance to play another game. You have to respect that kind of willingness and dedication. Bus ride that sucks under the best of circumstances. That is 376 miles and 6 hours of driving under the best of circumstances.

1300 in the afternoon means that just about anyone who is on campus is in class. One of the solutions to getting an audience was provided by campus catering who showed up with trays of food – free to all the students. (Feed them lunch, they will come?)

By half-time there was enough left over that anyone else – staff, spectator, or band, that wanted food could eat. They had friend chicken sandwiches, a veg alternative, French fries and coleslaw. 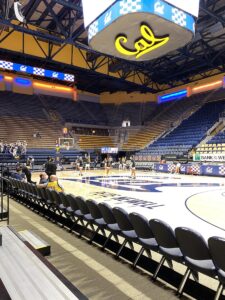 this pretty much was most of the attendance. Empty to put it mildly. Score at the half was 53:23 Cal.

I have Aquarius completed but for the beading 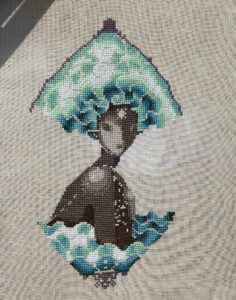 and figured out that this Barbara Ana Mystery 2 Part Stitch Along is not featuring another one of her ladies. 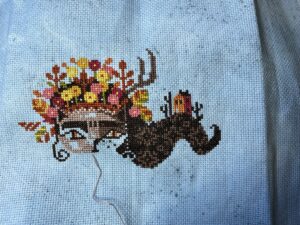 not unless a lady has ears….