↓
Home→Fiber→Cross-Stitch→and it is Five Candles 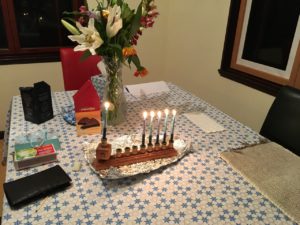 now at the fifth night

I easily completed the trip to the SFVA this morning by taking the BART from Berkeley and the free Bauer shuttle from 5th & Mission. I love the shuttle which is really a large, comfortable coach bus with seat belts if one is so inclined.  In fact, the connections were good enough that I managed to arrive significantly early for my appointment which was to precede infusion #3.

Didn’t seem to faze the screening nurse or either of the chemo nurses. The first did the quick screen, the later two just hauled me in, drew the lab and let me sit in one of their comfortable chairs which I waited on both the results and my doc. We agreed on this week, next week and a repeat scan the following week before determining if I need more weekly therapy or can go to q4 week maintenance.

While I was waiting, I started on Bill R’s hat. Why not, thought I, it lets me observe without being obvious. 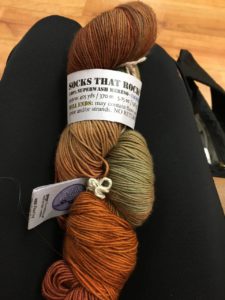 There is a moderate amount of turnover during the day as some patients have more and others less meds to infuse. Some chemo takes 10 minutes, others take hours. Part protocol, part science and part art I think.  I had a chance to talk to several of my compatriots. Today I was the only one in the room who was both a vet and a retiree from which I am assuming that just about everyone else met the means test for care. Home location ranged from Santa Rosa to Oakland to Alameda (+ my Berkeley) in addition to several who were local to SF.

I promised to bring cookies next week (at least two of the guys are going to be hanging out as well) so now I will just have to see which one of my lovely daughters in town will bake them for me. I can do breads and scones but can’t seem to manage anything other than the “slice & bake” you can find in the grocery store cool case.

Everything went well and I was done by 1400, caught the 1440 Bauer Bus, the BART and was at North Berkeley less than an hour later. All of which was much easier than dealing with traffic and the Bay Bridge.

I mentioned the hat – 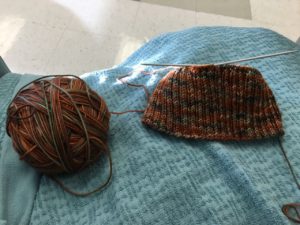 I didn’t get a chance to work on this till evening when George and I listened to NPR and chatted.  We stayed with the radio programs through Market Place and into Fresh Air. There was an excellent set of interviews with Carrie Fisher which had been set to air and now served as a retrospective. 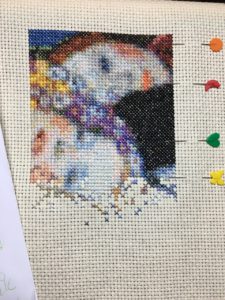 and the second face close to complete. I still am being driven nuts by all the fussy flower hair stuff which necessitate color change after color change. If I was as disciplined as my friend Jill who completes 10×10 sections in order and whose work always looks neat, I might not have all those stray colors out there… But this really isn’t bad for 4 days…