After getting through my 0800 conference call and waiting on George to finish his, we went and picked up Dani’s car and dropped it off at the tire place. The guy there took one look at the old tire and said that there was no way it could be repaired.  Ok – so donut off and new tire on. Check. Return when we call, no later than 1400. Check.

So there I am on San Pablo Ave. in Richmond. Somehow it hadn’t sunk through till I looked around, that I was an easy walk from Shana’s house. Do I have enough sense to call? Nah, I just walked over to find that she wasn’t home. I made myself comfortable on the back patio and stitched for a while.  After they returned from story hour at the library, I had a chance to visit with Shana while Lev took a well earned nap.

Car done early, I hiked back to the tire place then drove the car back to Dani’s work. Starbucks, at one end of this particular strip mall was almost deserted inside with a line practically around the block for the drive thru. Note- I live in Berkeley – I don’t know of a drive-thru anything in my town. But then, we really don’t have any strip malls either….

The rest of my day, after George picked me up, was quiet. Some organizing, some stitching.

OH! Noah fixed my PC laptop (as opposed to the MAC that I use for just about everything). It had lost its internet ability. He had checked with the manufacturer – nothing there – it was part of a lot outright sold to Amazon. Amazon? This was more than 30 days…. So my choices were computer store or Noah. Queue the second choice. Turns out the connection card, located for some reason below the extra memory was loose. He seated it back where it belonged. Wifi back.

Detour from The Bear – 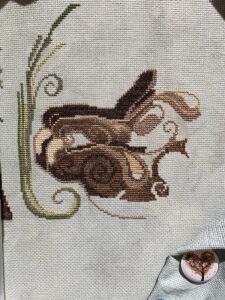