actually on time – or so close as to not matter.

The Ovation of the Seas docked on time this morning. There was the usual line up of people just ready to dash off the ship as soon as it was cleared. I have never quite figured out why anyone would want to schedule an airline flight (is that redundant?) within 2-3 hours of docking. There is no guarantee of the ship’s on-time arrival, the presence of customs agents available to clear one, transportation, or the absence of traffic problems on the way to the airport. Seattle is not San Diego. The airport is not 10 minutes from the port, so visible that you can watch planes take off and land from the comfort of the ship at dock.

I went to breakfast, waited till about 1000 and wandered down two decks to find a line stretching almost to infinity with cruise director’s staff going nuts trying to enforce social distancing. Not happening when there are that many people wanting to get off the ship at once. Not being interested in hauling my suitcase and backpack down a couple of flights of stairs, I just hung out until an empty elevator showed up, then waited in the Schooner Bar till the line pretty much cleared out. Thru the line, down the ramp, down the escalator, across the arrivals haul before hitting another line for Immigration. Then outside where I hiked back to the same area where Lyft had dropped me off on arrival.

Had a lovely chat with my Lyft driver who has been at it for several years He works from 0300~0800 on most days, then heads home to take over childcare duties on those days when his wife has to be in her office. Today was not one of those days, so he was planning on driving till about noon. Dropped me off at King Street Station where I was able get my e-ticket printed and find a seat. 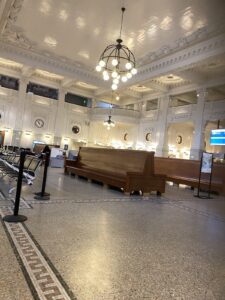 Pardon the slant, but the place was both empty and echoing

We were between scheduled trained. Seattle’s King Street Station is 1920’s deco. In attempting to keep much of the original look and feel – the tannoy has not been upgraded. Think vast, echoing and completely unintelligible when any announcement, whether live or pre-recorded, was made.

As this particular train originates in Seattle, we pulled out promptly on time, Two stops down, as the train filled up, I was joined by a pleasant but extremely garrulous gentleman. No further audiobook listening or stitching was accomplished.

Not even five minutes late, I arrived in Kelso-Longview and was met by Kris. I realized it is just shy of a year since I was last here. Looking forward to the visit, then I head home on Tues.