Ah, the joys of getting out at the crack of dawn! Not that I wasn’t awake or anything since I am nowhere near completely on this time zone. With an 0730 flight that meant leaving the hotel shortly after 0515. The cold breakfast still included hot beverages and the traffic could have been much worse.

We flew on Indigo from the domestic airport (airline new to me, but with ~ 100 Airbus 320s which they bought new….) to Jaipur – aka the Pink City named for the color of all the buildings so painted for English royalty visits back in the mist of time. Take a bunch of red brinks, turn them into a powder followed by a slurry. Redwash like many have traditionally whitewashed and there you are.

We had a late breakfast at the hotel then headed off to the Amer Fort – which you can find under Amer Fort on Wiki where you will be directed.  The buses park below, cars and jeeps form the backbone of the shuttles up the hill to the fort entrance. It would be faster to walk but certainly not safer considering the two way traffic, one lane roads and the insanely aggressive drivers.

We joined the daily flow of 5000 tourists mostly Indian but heavily seasoned with foreigners. With a typical architecture, there are four main areas, each with a definite purpose and its own courtyard. The follow clear description comes from the Wiki –

Painting and ornamentation is in abundance. So is a obvious attempt to demonstrate preservation (bamboo scaffolding) without workers due to its being Sunday. Extensive photo taking was involved on everyone’s part. We had only one group member who succumbed to the swarms of hawkers prior to reboarding the bus.

Late lunch was excellent at a chain restaurant featuring BBQ prior to officially checking in. I skipped the evenings festivities in favor of a lot of sleep.

From the Old Gate to the many painted buildings 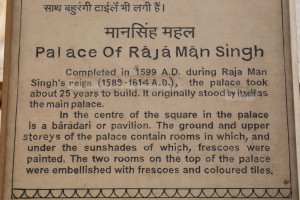 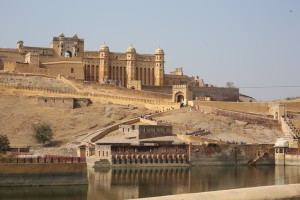 An animal or two

painted elephant at the Fort

And other Palaces on the way back 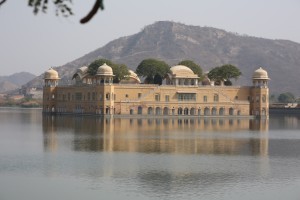 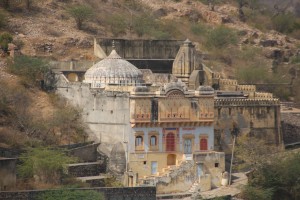 Unknown to me but Intetersting