↓
Home→family→A walk in the park

From where I am staying in outer Sunset, it is just a short hike across Golden Gate Park to the SFVA. Of course, I can just ignore the fact that the portion of the stroll from the park to the VA is straight up 42nd. 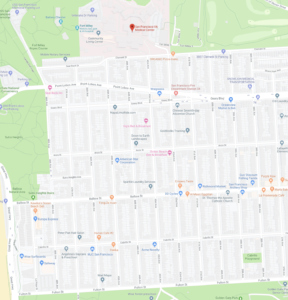 at the top of the map

you can see the location of the VA. and at the bottom you can see the small upside-down “V” where the cross-road park road connects to the streets on the north side of the park. Please count them, five blocks straight up hill, a definite challenge on a cool and foggy morning.

It was dental day for me. Like many others of our generation, I have a significant amount of dental work. Due to the care and diligence of Army (and Air Force) dentistry over the years, I still have all of my teeth (except for wisdom which exited when I was in med school thanks to the U of MN Oral Surgery Residency Program. $25, thank you very much). In fact, I have had one crown for a significant number of years, enough that I actually have worn through the crown. Today’s mission impossible for my poor dentist whom I have gotten to know rather well over the last two years, was to see if it could be patched with the alternative facing me of a new crown. Much as I really appreciate the SFVA dental staff, I don’t need to devote another several ½ days to the dental clinic. A successful patch later, I was about to go out the door. Only one dental issue left in my future – replacement of crown that will involve a visit to the periodontist. Since the previous dentist retired, there is only a part-timer on contract. His tech stopped in – would I be able to trade my August appointment for returning this afternoon?

It was only a matter of taking the shuttle over to UCSF and hang out with George for about three hours and taking the shuttle back. Nice guy (family Ukraine -> Israel -> to California) which means, of course, his practice is in Menlo Park (altho he denies living in Sunnyvale). His tech’s family came from China when she was young. My dentist’s family came from India. The nurses and cleaning staff are equally reflective of who takes care of our veterans–it is the new immigrants and their children. The ones that feel that they are contributing to the U.S. by taking care of those who serve. And often, they are also first to volunteer should the country need them and at a much higher rate than those who are two generations or more in the U.S..

After being told to expect pain, I breezed through the pharmacy and ran for the shuttle, getting back to UCSF by 1600. I spent the afternoon just hanging out with George, then we watched the first three quarters of the Warrior-Raptors game before I headed to the N-Judah. He still has squat for white cells or platelets; I figure another week in this place. He is bored, he is tired. If you want to email him directly – georgeDOTrehmATicloudDOTcom with substituting the appropriate punctuation  It would be a lot more appreciated by him than me playing momma monkey and plucking loose hair.