The original temple – started somewhere around the 7th Century comes complete with it’s story of a man (god/saint) coming on a tiger and defeating the local enemy/god/whomever. After that, he built a cave back into the rock face where he lived for a few years. I believe this was all a part of bringing Buddhism to this area of the world. It matches with the final temple we saw today which originates from the same time period. 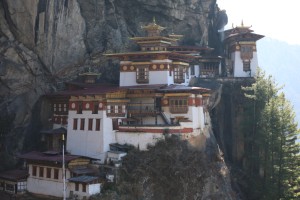 The travel photo (taken from the second rest stop

Ignoring bad weather and numerous fires which have a tendency to be repeated events when one builds out of mostly pine and then adds a lot of surface paining – the Tiger’s Nest has been pretty much continually occupied. Obviously it became a holy place, a pilgrimage site. Much more recently (remember Bhutan only opened to tourists after there were roads) it has also become perhaps the iconic picture used by everyone to represent the country in tourist advertising.  The height information I included yesterday.

We made the walk in three stages, starting out early to avoid both too much heat and the worst of the tourists. The first section of the hike is from the parking lot to the tea house. The elevation increase is well over 1000 ft on a walking trail that is sand, dirt, a lot of rocks, boulders and switchbacks. To say it was not a stroll was an understatement.  I took a few photos of the scenery along the way. You can look down on Paro or up at the mountains. Taking pictures of the path seemed a little bit pointless when you were experiencing every step and scramble of the way.

As an aside, there were a few that took a pony ride to the first stop. Given the steepness of the trail and number of boulders I was actually amazed at the idea of riding up. So, apparently were a few of the horses who didn’t seem all that thrilled about being led up a mountain with a load on their back. These were not elderly, but mostly plump tourists from a country south of here.

There were tea and biscuits (cookies) at the teahouse along with washrooms. It wasn’t that hard, other than sun glare, to get a picture of our destination from this elevation. Other than that, our group had strung out a bit by this time. There are two of us under 70, the other seven being between 71-76 and reasonably fit. But then there is hiking up a mountain at significant elevation. 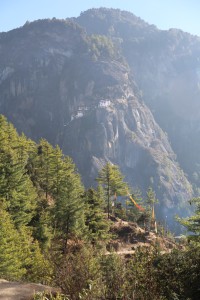 The elevation increase to the second point wasn’t quite as much, a few hundred feet less as a matter of fact. Not that it seemed all that much less. Again to here, switchback path not at all level or designed for those with any balance problems.

looking across to the Tiger’s Nest

We had heard all sorts of horror stories regarding the last portion of the trip which travels down via steps to a bridge crossing a small ravine, then about 1/2 back up to the Tiger’s Nest location. Slippery steps, absence of handrails or resting locations. Some of these stories were fairly recent. Imagine my surprise – yes there were steps, dozens and dozens and dozens of them traversing back and forth down the cliff face, all with sturdy posts connected with iron rails at three levels. No way to fall down the side of the mountain unless you really tried.

the wooden bridge and trail

As we went down, I tried very hard not to think about having to hike back up those self-same stairs.  The Tiger’s Nest is actually a series of temples; no hats, no shoes, no electronics of any kind allowed. As they also came fully loaded with wood smoke and incense, I forgo my opportunity to choke and court migraines in favor of fresh air and people watching.

Temple on the other side

front building (now with lockers for all the electronic treasures)

coming across the lower bridge

and hiking up the last stairs to the temples

No surprise, my legs were not happy about the multiple flights of stairs back up to the second lookout point. From there it was a steady, slow hike down the hill dodging those on the way up including a fair number of pilgrims and several mothers with babies on their backs and small children by the hand. 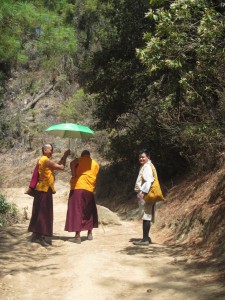 two monks with sunshade on their way up

I decided to stop whining at all and just keep my comments about toes cramping from gripping the bottoms of my shoes to myself.  We started up ~ 0730. I was back down to the parking lot by 1200, sharing a picnic table with those of the group who just went to the tea house and had come back down.  The other “young person” in the group wandering in about 25 minutes later and the final three with our guide shortly after 1300. 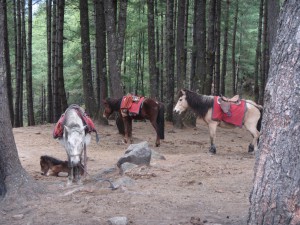 they know their way to the barn

We had a stop at the oldest temple (7th Century) on the way back to the hotel.

the third figure in the monk’s dance

We had a break before dinner, a power outage that lasted hours and the usual dogs barking us to sleep

and just to review the bidding – yes, I was really there 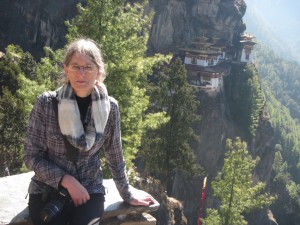 the one photo of me for this trip