Our river cruise ended officially this morning when docking at Vidin in Bulgaria. Located on the southern bank of the Danube (usual Wiki link here). The town itself has a long complicated history ranging from the Celts to the Romans to the Ottoman Empire all of which had influence on the peoples, architecture, ethnic mix and probably stubbornness – even before WWI, WWII and the modern times.

Of note, when I was here in the mid-90s on a mil-mil mission out of US Army Europe, a key point stuck with me from one of the Bulgarian officers. He said that Bulgaria has always been a bellwether country. Not in a good way, mind you – but just watch – they have ALWAYS been on the losing side of every single conflict. Not most of them, he emphasized. But all wars, each and every time.   One can only hope that Bulgaria joining both the EU and NATO are not going to spell doom for both.

Anyway, the most interesting stop of the morning was at the Vidin Fort[ress] – Baba Vida – which, as you can see dates from the 10th century with additions and remodels since then 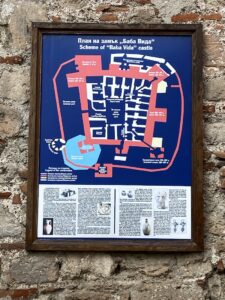 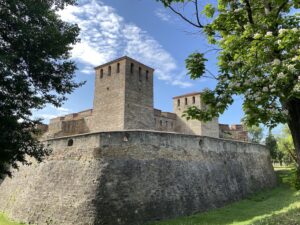 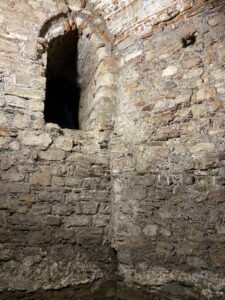 then it was lunch followed. by getting back on the bus for the trip to Sofia. I didn’t take photos of much of the housing once we hit the outskirts. Frankly, most of it looked like every other Eastern European city with high-rise cement structures. Of the “basement slab” construction model. A lot of it, built in the 60s, 70s, and early 80s is in need of repair. The good thing? When communism fell – the apartments were turned over to the occupants as the new owners. The difficulty? Maintenance, like everywhere else

By the time we hit the hotel, I was totally and completely done with tour guides, crowded sidewalks, noise, and bus rides.

George went out on a dinner scavenger hunt. 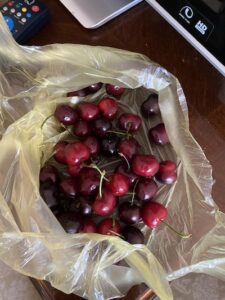 and he brought me cherries!