that section of the Danube which is narrow and lies between Romania on one side (north)  and Serbia on the other (south). Originally fairly impassible – a joint project took out rapids and inhabited islands, built locks and power generation. In today’s English -it is referred to as the Iron Gates (and here you can find the usual Wiki information).  From the point of view of a river craft – 15 meters wide) it doesn’t seem all that narrow. But these boats are long and narrow and would not transverse rapids easily if at all. 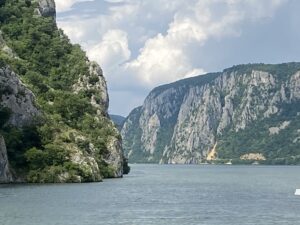 After cruising down the river for most of the morning – we headed into the gorge. The cliffs rising on both sides are impressive as is

the face carved into the side of the cliff.
I spent most of the day on deck just watching the scenery and waiting till the router was rebooted with the “new” passwords” so that it would be possible to send out yesterday’s emails.

The first set of locks were actually a double set. The drop, as I remember, is about 15 meters. the second set of locks (Iron Gate Dam II) was late enough in the evening that I didn’t stay up. 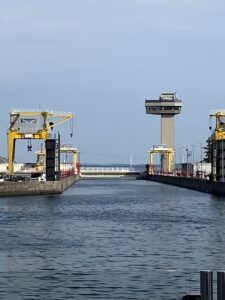 this is the initial lock of the first set. When we dropped down, a second lock was in front of us with another drop.

The two power stations are independent and send power to the individual country that built them. From what I heard, Romania updated their turbines and generators a while back. No clue if Serbia did the same.

We dock in the morning, have a short foot tour followed by lunch and a four hour bus ride to Sofia….