We docked early – and I do mean early, even by my reckoning. Unless you don’t consider 0400 prior to sunrise early. If you that is normal for you, then you are part of a very small group of people that likes early and quiet. 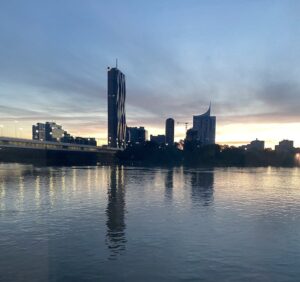 and then the sun rose -making it even more glorious. 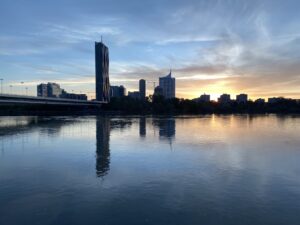 We caught the bus into the city but had not planned on being involved in any of the tours. As it turned out, today was a Catholic religious day (variable date depending on that year’s celebration of Easter) and just about everything was closed. Allegedly the museums were open. Except that we found a number were actually not open on Thursday…like the Wiesenthal for example. What was open? Obviously tourist shops and purveyors of food.

From our drop off point next to the Danube Canal (which is not the river) we walked toward ?St Stephan’s Platz” 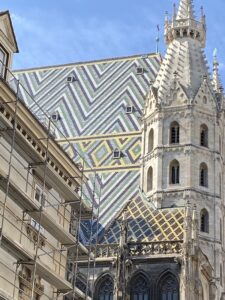 where the cathedral roof was tiled in the most interesting geometric patterns. 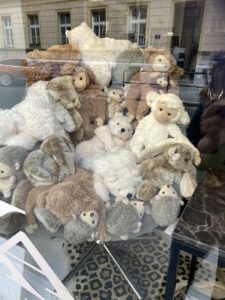 which was priced at a mere 3500 EUROS 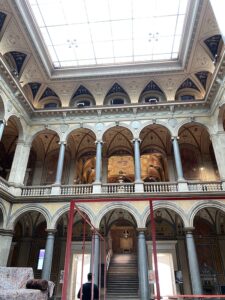 Where George grabbed a lot of photos – but really appreciated this particular piece of furniture. 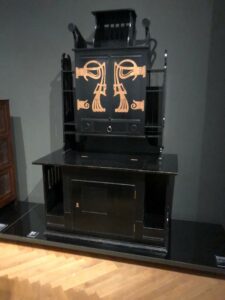 lunch was outside in their small cafe – a lovely veg pastry augmented with pesto, mustard seeds and onion chutney. Now, when I read this combination – it sounds weird. Let me assure you it was most excellent. 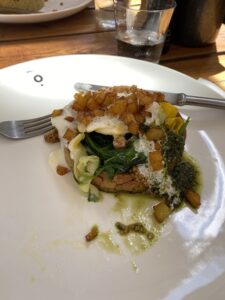 Dinner back on the ship was meh, except apparently for the Sacher torte desert, 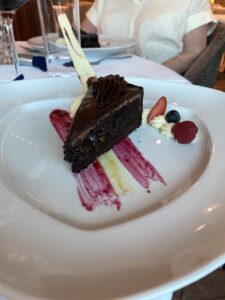 and finally – this morning I made a bit of progress on the LongDog. Those are birds perched on flags at both sides, and I have started the top of the circus tent in the middle. (yes, cat and mouse, I think) 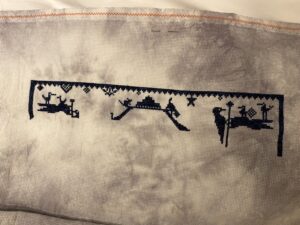