Up front – I refuse to spend more on airfare than I spent on the cruise. So, by the time I had booked this second leg of the cruise, all the reasonable airfares back to the Bay Area had been sold out. This meant that my choices were to go through one of the other islands (not a good choice), go through Dublin or Heathrow (also not great choices) or pay American Airlines obscene amounts of money to go through Miami.

Now that I have experienced the particular joys associated with this journey  – I would have been better off just booking the Miami leg and throwing myself on the mercy of friends for a night or two.

Apparently – what a surprise – there was “weather” in Canada. Amazing – bad weather in December – who would have thought….

Back to the beginning of today’s journey… 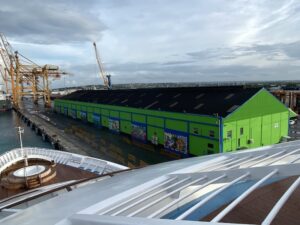 We sailed into Bridgetown on time and were docked by 0730. and were followed in by the Celebrity Silhouette. 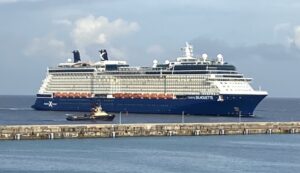 Rather than getting off the ship for the airport transfer at 0800, we waited a bit till Barbados Customs opened. Tiny shuttle bus 50 meters to the Customs location. Back on the shuttle, another 50 meters to luggage. At least outside was a full service bus.

From there we drove across the island to Grantley International Airport. I am glad the day was relatively cool and not raining. 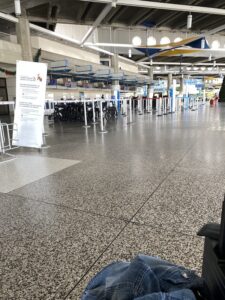 As has my experience been, checkin is outside under roof. And, of course doesn’t open till four hours before the flight is due to depart.

Checkin was a challenge involving a number of phone calls since my COVID test was for the US and the US regs state previous Calendar day but allow that it can be a bit longer if the test was valid when you checked in and you have been in transit in the meantime…. Ok – checked in.

My flight was essentially empty – estimate no more than 15% of the seats filled. Where was I? Oh yes weather. Due to the fun of Canadian winter the flight was a good hour late arriving which meant we were more than an hour late in departing. Not an issue for me, I thought, but for the four people on my flight whom I had gotten to know from Montreal it might prove a challenge. They originally had over 2 hours between flights…

The flight was lovely, quiet, and everyone let the French-Canadians off first. Not likely to happen on a US flight – just saying.

And then the fun began. Since we were late, US Customs and Immigration had closed for the night. So I had to exit the secure area and clear Canadian Immigration. Thank goodness the officer was kind and was willing to work with me. After processing there, it was getting extremely late and all food options other than vending machines were closed. I hung out in the baggage area till they were ready to close, then after checking to make sure that my bag did NOT come up on the carousel but had made the flight – I braved the main part of the airport to find a place to wait.