It is Sunday. The puzzle is finished. The sun is shining. 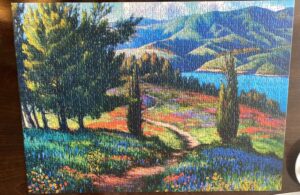 It looks benign, rights? Oh so not. the table is dark, the puzzle is actually a lot darker than appears in the picture and that large tree was the final frontier.

I spent the day relaxing, chatting with a few people and stitching (what a surprise?)

There is No Planet B (Cloudsfactory.net) received its final 385 stitches – 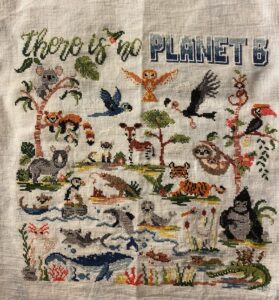 stitched from a kit (16 ct Aida, all the called for floss) ordered from the designer. She did a lovely job including information about each of the endangered species in the monthly segments.  I have no clue what I will do with it yet. Not a concern.

Another 1085 into the Long Dog 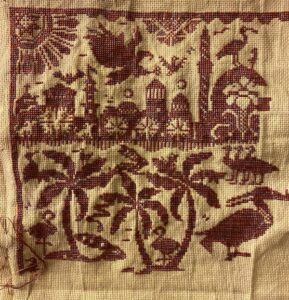 which means.I have 2/12 paged complete. The pages are narrow and long (giving four across and three down) so that makes me ~ 1/6th done.

Otherwise  the ship is having their “near the end of the cruise BBQ on deck.” After looking at the offerings last cruise, George and I skipped it. This time? I skipped it in favor of soup and salad delivered by room service.

And as explanations about my early comments about cruise ships and Covid – the site I find best is the Worldometer – corona virus section which lists cumulative statistics as well as the last 24 hours (GMT is the reset). Johns Hopkins also has a site which has become too complex for me to want to navigate.

The ship that sat in Japans harbor for weeks was the Diamond Princess – with 712 cases and 13 deaths. There was also the [Grand] Princess which wound up in Oakland Harbor. That one doesn’t make most of the stat lists because the index patient got off the ship and home prior to becoming seriously ill and dying. And then there is the MS Zaandam which had two reported deaths (I think there were more but the rest happened off ship). Other cruise lines weren’t spared. Phoenix had a ship near the Indian Ocean that managed to offload all of their passengers before gradually limping home. Royal & Norwegian each played “pass the crew” between ships repeated so that most of their staff returned home by sea rather than  by air routes that no longer exist. Even so, most ships kept a minimum crew (which ranges from ~30-150) in order to keep the ship afloat. Since most carry extra rations for the full complement, food should not have been an issue early on. (And Treasure Island avoided influenza during the 1917-1918 pandemic by being isolated and having their supplies dropped off at the dock).