Like most ships, there are scheduled activities on the daily program. By and large, like all other cruises I have been on, I am ignoring them in favor of reading, stitching, relaxing and visiting with new friends.

Having said that, there was an “event” on the schedule today – Coffee with Officers which was scheduled in my favorite Deck 8 forward lounge at 1000. I had just been about to leave, having had it “up past here” with one of those passengers who you wish was anywhere else. Unfortunately one of them decided to occupy a table next to me in the lounge and spent from 0800 on talking on his phone with completely trivial conversations.

Up front, I am going to say that I think it is much more likely that a man would pull this stunt – of spending hours in a public place on a phone – than a woman. Especially someone who acts and dresses like a senior executive type. I do not think this “gentleman” appreciated when I informed him that if he expected his conversations to be private, perhaps he should conduct them in his suite or other location where he would not be disturbing others. Perhaps he thought he was the only one on the ship who spoke German?

Anyway – the Purser arrived just around 1000 and headed clockwise around the room, which means that my table – where I was stitching and Stan was sitting across from me valiantly attempting to complete a mostly dark shades 1000 piece jigsaw puzzle. (Note, dark puzzles on dark tables are not fun).  He (the purser, not Stan) is from Grenada and was a child during the US “interference.” Beyond that, he described the challenges of being on ship when the pandemic hit and trying to get all the crew home (not easy when you are in the Med, your crew is from Southeast Asia and there are no flights. Or, when there are flights, the Italians will not let you disembark much less travel to the airport). The miserable handling of the on board outbreak by Princess & the Japanese Health Authorities really damaged the industry and has had effects everyone is still feeling.

This afternoon I attempted to attend an RCPSG meeting via Adobe Connect. Unfortunately, there was not an “audio only” option that I could find. I am glad that it was recorded, as I caught maybe 15%.

The Star Legend is long and narrow. Central corridor (correct term here – passage way?) with one row of cabins on each side. That is it. No center section like is common on the large ships. 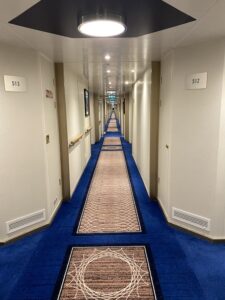 and there there is the usual lovely food – complete with red & green tomatoes for the salad and a variety of lovely, spicy soups. 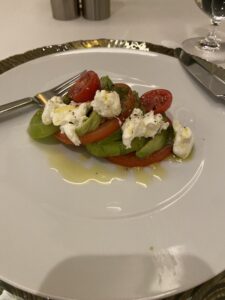 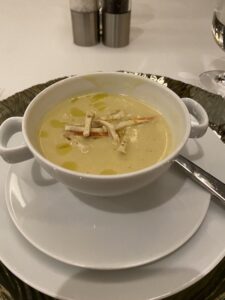 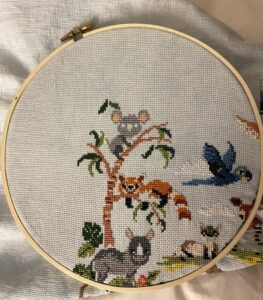 I also put 1200 stitches into the LongDog, but I will save that update for tomorrow so it looks even more impressive.