Today’s port is Santa Cruz de Tenerife which is another of the Spanish possessions in the Canary Islands. Anyone who has much cruising out of Lisbon, Barcelona, the UK has probably been here. It is also a favorite on many of the trans-Atlantic routes.  We shared the port today with the same Aida ship as before. And, just because you can’t have enough Germans around (sorry Christian)…. there was Mein Schiff 4.

Yes, that is right. A cruise line that doesn’t name it’s ships but numbers them. I am sorry to say that they have purchased at least one of the Royal Caribbean smaller ships.

Anyway.  The port area is flat and well signed for those of us who might possibly not be able to understand that painted walkways with arrows lead you out of the port and into the city. 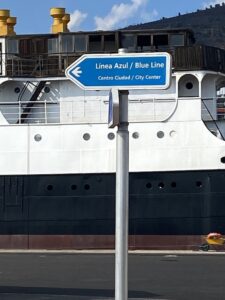 Signs in the other direction clearly point toward the cruise ships. Having said that, we watched people head happily across a parking lot. I am hoping there was a vehicle waiting as that short cut had obvious, high wire fences to keep either people in or the riff-raff out.

This is an extremely walkable city. but the volcanic origin mountains rise steeply right behind the main portion of town. 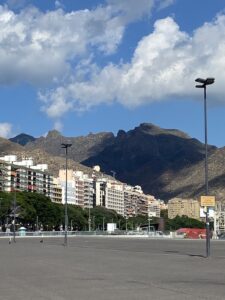 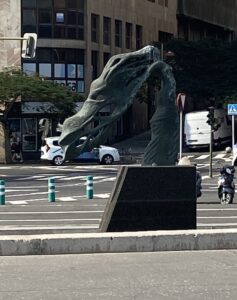 I thought I remembered a museum along the port toward the tram tracks. The building was there, but there were no signs. And the building was now completely covered – with 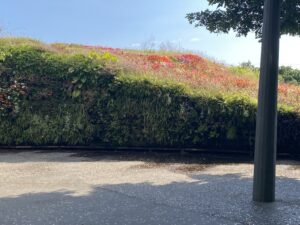 Wild flowers on the roof

I was going to comment before but didn’t. I have no clue why there seems to be such a Spanish obsession with shoes/shoe stores. There are more shoe stores than there are souvenir shops. Along the pedestrian zone both yesterday and today the ratio of shoe stores to anything else varied between 1:3 to 1:4. Sorry, I simply do not understand that kind of fascination with shoes. You can only wear one pair at time and why would anyone need more than 3-4 total pairs to have a good life? Running/hiking shoes, every day shoes, maybe a pair of dress shoes. Add in a pair if there is something you need particularly for work.

[Off soap box – I did not inherit a shoe gene] 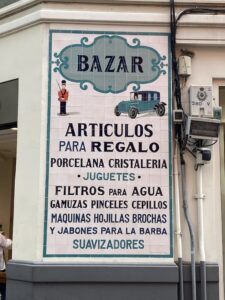 We found the Central Market. 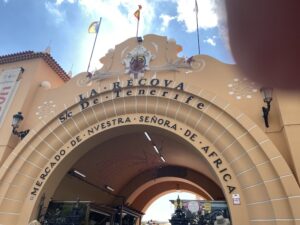 Entry to the Central Market

Unlike our last stop – this one was bustling with customers visiting green grocers, spice shops, butchers, cheese merchants, flowers and a dozen other specialty selections of goods.  I ended up at SuperDino (yes, it is a real store chain) which was downstairs at the market. After the discussion yesterday, I Just couldn’t resist. 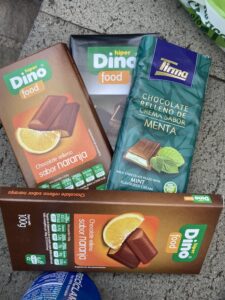 Since neither of us were really in the mood for a tram ride (over the mountains to the other side of the island is a lovely town and the scenery is interesting on the way), we headed back to the ship for a late lunch.

And, if you are not interested in cross-stitch you can stop reading right about now…. 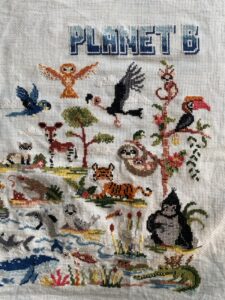 The pattern is called – There is no Planet B. Each one of the creatures is endangered. This months portion are the two top left birds + the words. About 3k worth of stitches of so….