Was so named by one of the Canadian cross-stitch designers. Probably because, like many of us, she became frustrated at continually having to buy yet another skein of DMC 310 floss. Aka plain black. There are few patterns that do not include black. Unlike white, there really is only one black. White, OTOH, can be white, bright white, eggshell white, ….. anyone who has ever tried to buy white paint for room walls has gone through the pain of explaining that “just white thank you.” and dealing with the response of “what kind of white?”

Anyway, I was digressing. If I had had a bit more sense, I probably would have gone to the JoAnn’s website and ordered a mini-cone of black and one of white, but I didn’t. I just went to DMC and ordered directly (coupons are sooo useful + free shipping).

And I now have enough black floss to last several lifetimes. 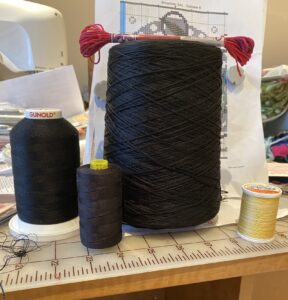 Cone of Doom
(and other options)

In case it wasn’t obvious. the new cone is the large beast in the center. For comparison, the skein of red on the top is 8 meters of six-strand floss. The second largest black is #12 sulky on a cone that originally contained 2100 meters. The smaller black spool is a new Egyptian #12 cotton I just picked up (and contains 400 meters). The yellow spool is also sulky #12 on a 300 meter spool.

Why do I want so much black? Ok, I probably will never use up this much black, but it is time to start on Halloween stitching! 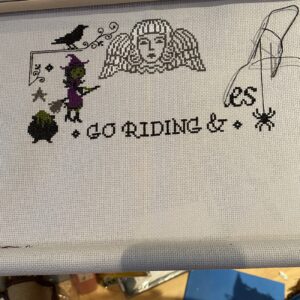