and I know that POD stands for something, but what? Escapes me at the moment. But POD is the name for the Alameda County run community immunization sites. Starting in January, Fremont Highs School on Foothill Blvd in Oakland was the first of such sites. Open Thurs-Sat, the location was picked for a number of reasons. The area around the high school is one of the lowest income areas in the county. And, as should not be surprising, had one of the highest attack rates of COVID-19 along with not insignificant death rate.

The area has a high immigrant population with Spanish, Vietnamese, Cantonese, Mam, all being more prevalent than English. 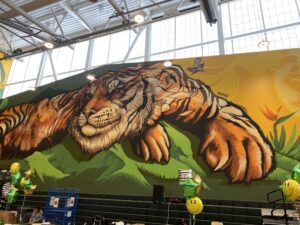 The Tiger mural watching us

I started working there in February and put in more than a dozen shifts during Feb/March. Starting in April, most of my shifts were at the Ashland-Cherryland site.  The Alameda Country Public Health staff worked all the sites, so one saw the same people no matter the location.  But anyway. …

Over the course of about five months, this one particular site (on three days a week) fully vaccinated over 26,000 individuals. Before anyone who has gone to a mass vaccination site scoffs – this location was set to support those who were local, didn’t have transpiration. So everyone walked (or was wheeled) into the POD.

I am mentioning all of this because today was the final day at this location. In addition to those working today a number of the rest of us who had put in a lot of time were invited to celebrate. There was cake 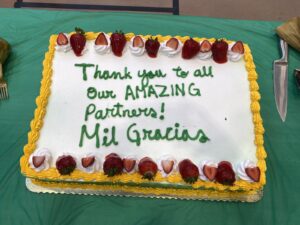 as well as food.

It was good to have a chance to say thank you and good-bye to many of those with whom I have been working these last five months. I am currently not signed up for anymore shifts as there are plenty of volunteers and most individuals who want immunizations have received them. If it comes to boosters this fall – then I will probably volunteer to work again.