has a lot of claims to fame: the Astor Family, first US Settlement on the West Coast, having been under British Control for a short time in 1812… But most relevant today was the presence of a portion of the 75″ of annual rainfall. Which is not to say that umbrellas and rain jackets don’t help. Except for when the rain is blowing sideways.

We took the ship’s HopOnHopOff around the loop then went back for a coffee. The Maritime Museum (on my list and highly recommended by Kris) was good for several hours of exploration. After that, I just wandered town to see what there was to see. It was raining – I did mention that didn’t I? So didn’t bother to take the camera out from underneath my jacket all that often.

Except for the incredible noise near the old, which turned out to have a most reasonable cause – 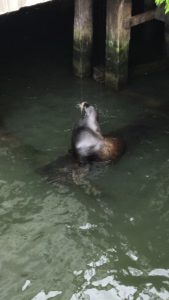 After listening to him complain about the lack of fish and adoration it was off to visit Pier 11 where I found a delightful small used book store complete with store dog. From there it was off to Homespun Quilts and Yarns. Moderate selection of yarns, but fabulous selection of fabrics and lovely people working in the shop. That is where George caught up with me as I had managed to lose him back in the Museum.

Heading back to the Paddlewheel now thoroughly soaked it was time to pull out the cross stitch and totally ignore the on-board lecturer. 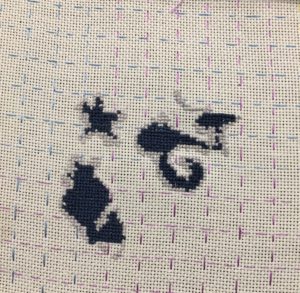 start of a new cross stitch

I am making it an early night…