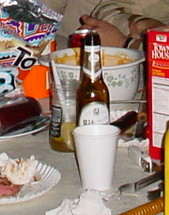 Today’s discussion is neither for the underage nor the faint at heart.

I made it through my routine Thursday activities that engage my life over at the library annex; including bookshelf stocking (boredom break), shot giving, and smallpox vaccine reading. The JAG officer (serving as the victim representative) stopped by during lunch, to let me know that all the players will meet to discuss standardizing operating procedures and protocols for the camps.

We are still holding the potluck outside. The temperatures are in the low 60s with a breeze. Let us be real, I got cold. Mike loaned me a windbreaker because he could not stand to see me shivering. Mind you, I had on a shirt, a turtleneck, and a polar fleece vest. None of which do much to block the wind. The guys are grilling hot dogs and hamburgers. Dan decides to make chili, starting three hours ago. He did not pre-soak the beans and they were more than a bit crunchy. Crunchy beans can lead to more than stomach upset. I promised to get some Bear Creek Chili Mix for a future potluck, after a discussion about meatless chili. We are sitting there, swapping stories and experiences at different duty stations (places know as Hungry Lizard and Lost in the Woods among them).

Discussion turns to travel. Bryan reports complaints from his flight attendant friends. Seems that security is getting more aggressive in inspecting everyone’s luggage, including the flight attendants’ carry-ons at US airports. Rather than rooting through the bags if something shows up on the screen, several locations have just taken to dumping out the entire bag. His friend was telling him about the embarrassment of having personal aids dumped out in public. Couple of the guys come up blank.

“Oh” I said, “You mean BOB.” (Pronounced just like the name Bob. I have worked in Emergency Rooms over the years and have removed an interesting collection of items from a lot of orifices.)

Blank looks from most of the guys. “You haven’t heard of BOB? The Battery Operated Boyfriend?”

The crew loses it. Hoots, howls, and various comments. When the laughter finally calms down, and the obscene secondary and tertiary remarks are over, the really stupid comments start.

I am barely keeping it together. “Joe, thought you were married? Right? Do you need an anatomy lesson? Rosie, with all of her daughters, cousins, or whatever, is not the same, not for a woman. Now, are you guys contemplating a market for inflatable dolls?”

“Huh?” says one of the other guys. (Note, there are about ten of us hanging out. I am the only woman, and I have to uphold my right to torture the rest of them.)

“Inflatable girl friend or the hand held version to be used with lubricant?” says I.

“You have got to be kidding.”

At this point, the two single guys in the group harass the rest of them about lack of imagination, lack of access to toy catalogs, and being dumb in general.

The conversation then veers off to all the websites that are blocked by the system operators. All adult sites are supposed to be blocked. All the music files and streaming video downloads are blocked. It took two days for one of the guys to get permission to download the Army Song from the Army Website. I mean, really, what a salacious item there.

The rest of them seem to be getting a ton of junk email. Most of it has to do with mail order of sex toys, drugs, natural medicines, and expanders. No clue why they are on those mailing lists, but maybe I don’t want to know.