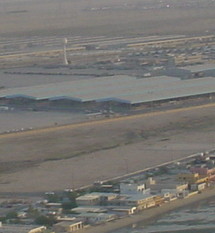 Once upon a time, I was stationed in Heidelberg, Germany at an organization called ERMC (European Regional Medical Command). I was in regular email contact with the staff providing medical care at a place in Kuwait called Camp Doha.

On a day in late March/early April 2003, I get an email from my buddy Craig. His information that day formed the basis of my oft-used multiple-choice question:

Who of the following were deployed to Kuwait/Iraq in support of OIF?

I kid you not. Craig discovered all of those patients. I uncovered repeaters on both bypass and the psych hospitalizations, plus some even scarier medical concerns then the cancer mentioned above.

He drafted a long email that he wanted sent out to everyone and I edited the thing. Our point was not necessarily that were a ton of unfit troops (well, that too) arriving in theater, getting worse and having to be returned, but that the Doctors/PAs/NPs who were clearing soldiers were not doing their jobs. They had not been educated about the operation, the medical support available in theater, or the physical conditions the troops were going to have to endure at the beginning of the war.

Craig and I were pretty blunt. Providers needed to do the right thing. They needed to have more than a clue—Vanna White was not going to be there with a smile, and a bunch of vowels to help them out.

We contacted a good buddy at the AMEDD Center and School and said I needed to send this information out. He did an excellent job of forwarding. Both Craig and I received numerous questions; we had some great email discussions. Mental Health (as a community) seemed to figure out what was available in the theater for support and what (especially medications) were not a good idea. Most of the deploying locations, but not all, cleaned up their acts.

I also did that lecture in August 2003 at the Force Health Protection Conference called Clueless in the Desert—What ARE They Doing Here? There were not many issues after August or so, since there were no units rotating into theater. Got the occasional email or phone call, and we tried to help them out. You might have seen the stories about individuals stuck at Ft. Stewart, and a few other locations, with nothing happening at all. These were both soldiers who had been mobilized, but never deployed and, those we had returned from the theater as unfit. They were waiting on medical appointments, waiting on surgery, or waiting on board actions.

And we won’t talk about the idiots at the physical disability boards who found someone who had failed at duty over here fit for duty and sent them back. And they failed a second time.

That takes us to January. And what to our wondering eyes appear? But another bunch just like last year! Now, it is not Camp Attebury, Ft Dix, and Ft Drum that are killing us. This time around it is Ft Bliss and Ft Hood. This does not have much to do with the intelligence of those doing the screening, or, maybe it does. These are not the same providers who performed the screening last year, they learned. We have a new generation of clueless and clearing.

Meanwhile, not all of the reserve and guard have been taking this lying down. They are calling their congressmen, and they are talking to the press. Apparently they have also been taking names and raiding email files.

Which leads me to the following: A number of stories ran in the newspapers, basically about the military deploying unfit soldiers to the Gulf and quoting me in some “Memo” I wrote last spring. http://www.kansascity.com/mld/kansascity/news/front/8268967.htm [Link no longer functional at publication time] who seems to be the original guy who admits he got a copy of something from somewhere. I have no clue as to how Knight-Ridder got a copy of our last springs’ email. There was never a memo. And I really hate it when someone says that I could not be reached—they didn’t try. [www.military.com/NewContent/0,13190,SS_032504_Pentagon,00.html and www.Trianglefreepress.com #34, April 2004 are two of the citations still left online. There are others, all you have to do is run a search.]

Not that I really want to talk to the press. No, not me. I have already had enough funny looks about that memo and who authorized me to write a memo and blah, blah, blah.

It is all true, many mobilization sites sent over service members who were harmed by the experience. (This is because of their pre-existing medical condition, not because of exposures in the theater; individuals who should have stayed home, because we are not equipped to handle their advanced medical problems. This is a combat zone.) I just wish it had been a little less sensational.