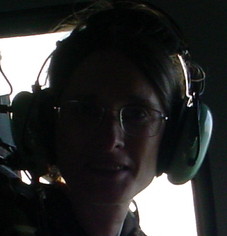 Or, what is a nice Minnesota girl doing in the middle of the Kuwaiti desert anyway?

My journey might have started when various ancestors left Europe around the turn of the century or my parents met at the University of Minnesota, after WWII (he was born it New York City, she in Los Angeles). But more than likely it started somewhere along the line in college with the knowledge that I had the responsibility to give back; to leave the world a better place than what I found it.

With an undergraduate BA in psychology in 1972 from the University of Minnesota jobs were not exactly plentiful, especially for women. What are your personal plans? Are you getting married? Those were all too frequent and perfectly legal questions which if you answered honestly, you were not believed. I had either too much education, or not enough.

Not being completely stupid, I started the application process to graduate school, medical school, and nursing school. Then went to the one that accepted me. I was informed by an interviewer at the one school that I did not have the right personality to be a nurse, and that many of my science course would have to be retaken (Organic Chemistry & Analytic Chem apparently don’t substitute for Basic Sciences 1,2,3). Let me see…one year to take courses that are only allowed for credit by the College of Education and Nursing followed by two years to get a BSN or fast track and spend three years getting an MD. Either way, I was paying for it myself. Duh!

Just for comparison, my first quarter’s tuition was $285; the last was ~$465. Just as in undergraduate school, I always held a job. Eating is as important as having a roof over your head. After initially planning on specializing in Physical Medicine & Rehabilitation, after my first post-graduate year (PGY1 or internship) I switched over to Family Practice, completing my residency at Bethesda Lutheran Hospitals in St Paul. If I had not had Israeli Dancing on Sunday evenings, I am not sure I would have stayed sane.

Mostly I attended services at Hillel on campus during those years, occasionally joining other congregations in the area for High Holidays; getting taken home for celebrations and Pesach by Barb and her family as well as spending time with other friends.

During my last year of residency I did two things that most thought were fairly out of character for me. Fall of 1977, I spent several months out in Los Angeles on an OB rotation and I joined the Army Reserves. Upon return home I found a note on my door saying “I need to talk to you about one of your patients.” And it was signed by some legal services attorney. He had also been leaving messages at our FP clinic. Since I was off to Ft Sam Houston in the next couple of weeks, and highly suspicious of any lawyer anyway, I did not call him back.

To make a long story short, the attorney who was representing my patient in a landlord-tenant dispute (nothing that I had done) and I were two of only five people at Charlie’s funeral the following fall, less than a year after a judge forced the relocation of all the tenants of this building in favor of gentrification and “progress.”

That same attorney and I were married in fall of 1978; it was a short Sunday afternoon wedding with a reception back at our house. (I liked the Rabbi just fine; I still would have liked a wine glass to have been stomped rather than a light bulb.) George stayed with St Paul Legal Services while I went into private practice in the area. We had our first daughter the following year. In 1981 we were getting restless and took the plunge, signing me on to active duty army for three years in Germany to get the opportunity to live in Europe. This was the Cold War years—the Reagan Years.

While at 5th General Hospital in Stuttgart I got caught up in NBC response teams. It wasn’t deliberate and it changed the course of my life and military career.. I just answered a simple question at a staff meeting.

Who here likes riding in helicopters?

Ok, came the reply, you are now in charge of all the NBC response teams.

What has that to do with helicopters?

That is how you get there, came the response.

And just like that, I gained a whole new set of responsibilities, experiences followed by opportunities that passed most others by. I did a second residency in Occupational Medicine after getting a Masters in Public Health at Johns Hopkins, all courtesy of the Army. For a couple of years, while stationed at Army Material Command I traveled to more small installations across the US than I ever had imagined existed and assisted in conducting chem and nuc inspections.

It was back to Germany in 1988, just in time to become involved in planning the retrograde of our chemical weapons stockpile out of Germany, see the Iron Curtain fall, and watch our second daughter learn to walk in Berlin while visiting friends over Thanksgiving in 2000.

August 1990, I watched the invasion of Kuwait from our operations center in the middle of the Chem Retrograde operation. I PCSd to 10th Mountain Division at Ft Drum only days after the ships sailed from Bremerhaven to become the Division Surgeon, the first time a woman had ever been so assigned anywhere in the Army. We joked that we were the 10th Replacement Division, sending forward pieces, parts and subordinate units, but the HQ never deployed. I had my first major experience (since being one) with Reserve and National Guard soldiers since we processed units and soldiers for activation and deactivation.

From there, I wound up assigned to the Army Surgeon General’s Office in Falls Church, VA back as the Occupational Medical Consultant. Our family had grown by a son and a golden retriever puppy. When I was reassigned to Germany in summer of 1993, it was with the challenge of our youngest daughter not quite six months old, two under five, a reasonably patient teenage daughter and an airline offering six single seats on the flight.

We were headed to Heidelberg this time. Over the next several years, 7th Medical Command was deactivated. The 130th Station Hospital became the 95th CSH (Combat Support Hospital) in its way to becoming Heidelberg MEDDAC. I had a steady progressing of jobs overseeing first outlying clinics, then being the Deputy Commander before taking command of Würzburg MEDDAC when the 67th CSH deployed in support of IFOR. Again, a change that sent me off in a new direction as 23 backfill from CONUS and 200 Reservists from the 5502nd and the 4005th put the place back together in time to pass a major inspection.

The three years after that passed in a blur, one year was spend as the Deputy Command Surgeon for US Army Europe and the two following as Commander for various combinations of Würzburg MEDDAC and the 67th CSH including a deployment to Bosnia in support of SFOR (abbreviations? There is wonderful help at Free Online Dictionary-Acronyms) as commander of the medical task force. Did I mention that I was also doing Army War College by correspondence during this time and that we had to stand a Joint Commission inspection just short of six months after our return from downrange? Never let it be said that I pick the easy jobs.

It was on the way out the door to BiH that I started my daily email journal. My original thought was to keep family and friends all updated at the same time without having to write dozens of individual emails; practical and with the knowledge that if I didn’t do it from the beginning there would never be the opportunity to catch up. This is 1998, long before the era of blogs, ancient history for some of you.

From Würzburg, I relocated to Müchen to spend two years with the Sanitätsakademie der Bundeswehr as a liaison officer; me and my lousy German. My family loved it. Shows to go you what happens when you p’o enough general officers in your own branch (and they claimed they were doing me a favor…).

2001; an extremely difficult year for the whole world. We relocated to Heidelberg and bought a house as the kids were getting older and I had had enough of feeling rootless. I had continued to send out group emails over the years, although without the regular frequency as downrange. I will classify my job as “not fun,” and leave it at that.

In April of 2003, I PCS’d (a permanent change of station) to Kuwait leaving my family in Germany for what was supposed to be 12 months. I had started writing again more frequently and had sent out an email to those off my Blue Factory list saying I was off again. I heard back from everyone one asking me to please include them again on my daily letters. They wanted to hear a personal side; I don’t claim that I can be completely objective but I know where my biases lie.

April 2003-Aug 2004 I was privileged be the ARCENT-KU Surgeon, caring for the service members (and civilians) living and transiting Camp Doha, Kuwait. Politics, race, creed, and religion did not matter—what as important was making sure that those going into harm’s way had the medical care that they need. And in some cases, sending home those who needed care beyond what we could provide in a system set up for trauma not complicated chronic diseases.

I missed my family, made friends, irritated more than a few senior “leaders,” and know I made a difference to those coming through our theater. Sharing my life with family and friends kept me connected to the larger world outside of the camp walls surrounded by guard posts and concertina wire. Those daily emails became this book.

Commuting now to Landstuhl, the war is more distant than when I was in theater and providing direct patient care. There are members of our small Jewish Congregation here in Heidelberg currently deployed and my organization it always seems has someone short term downrange on mission. The worry, the sending of care packages, and the checking on family left behind has become a way of life.

Professional Credentials? B.A., M.D., M.P.H and Board Certification in Family Practice since 1978 (with recertification continuously to include summer of 2004—yes, I passed that exam) and Occupational Medicine since 1988, but you had already figured that out.

Still married to that lawyer who came looking for me about a patient back in 1977/8 and we have four pretty great kids. After all, parents are entitled to have bragging rights, even when attempting to survive the youngest three who are all teenagers. I have at at least till next summer in the military, my email from the Balkans to wade through, a website for the family to update, the fiber blog to maintain and all the things from work to keep me busy.