I am still trying to identify why particular colors of embroidery floss seem to vanish just as I really would like to add that particular number to the canvas. I suppose I could accuse Shana’s two cats of stealing skeins, but that wouldn’t be the truth. Although they love string and would pounce in a heart beat I don’t see them as going on the offensive. I have some DMC floss-holders, I have a few baggies-on-a-ring and then there are the bits and bobs hiding in the bottom of whatever box, envelope or container I could swear I just emptied. In between being frustrated by the cross-stitch I did a bit of ironing for Shana as quilts go together much more easily when the blocks get ironed.

Yes, there was cat help for that as well 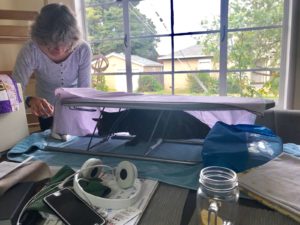 In between I listened to the NYY vs As game. Or watched the box on my iPad when it finally got underway over 2.5 hours late. Something about rain. Not an issue for the East Bay…