There are times that all the neurons just aren’t firing and you go down this strange path trying to figure out something that just doesn’t need to be bothered about.

Let me give you an example. I was in Munich at a conference, then traveled to Speyer to visit friends, returning to Munich today. I bought a round trip ticked from Munich to Speyer along with one City-mobil pass.

With me so far?

In Munich on the way to the train station I just spent 2.80 for an U-Bahn ticket since had hours of time and wasn’t sure what my connections on the way back would be. That would be when I would use the City-Mobil as part of the train ticket and not have to worry about purchasing a local ticket. My friends dropped me off at the S-Bahn in Speyer. And somehow it was in my head that I was choosing when to use the City-Mobil part of the ticket. Now? or in Munich. This lasted till I looked at the price of at ticket to Heidelberg – 10.50. Hello? That is expensive. So I double checked my train ticket.

Blinding flash of the obvious, I have already paid my way from Speyer. Why would I want to do it again? Perhaps it was the fact that I had a train change in Heidelberg from the S-Bahn to an EC train? Who knows? In any case I figured it out before paying a second time……

Both S-Bahn and train were on time as was the S-1 toward the airport in Munich. My train trip proved to be a bit interesting. I had reserved a seat which turned out to be wonderfully right near the door and adjacent to the luggage rack which negated having to boost anything into the overhead rack. I sat down. There was an elderly (trust me, she looked a lot older than me) woman sitting in the window seat giving me a really hateful look. Perhaps she wanted the seat to herself? The train was quite full and I was glad to have paid for the reserved seat. In any case, I proved impervious to all of her bad vibes not regretting a moment when she got off in Stuttgart. With both seats to myself for the duration of the journey I attempted to cross-stitch. No go, train vibrates too much.

So it was audio books (for those of you with an Audible account – there is a Ben Aaronovich authored Peter Grant short story for free down load.) for the duration of the journey.

I’m checked in to the hotel and facing a 0635 flight to Barcelona. 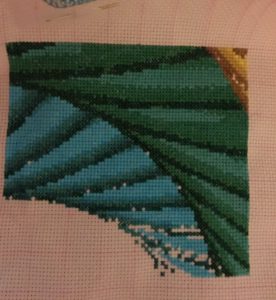 It is going to be slower going from here. The runs of color are much shorter and more likely to be separated rather than contiguous. I also didn’t bring any colors beyond the blues and greens to might just run out of cross-stitch before heading home.