(in which I typed out this whole post which then refused to save….) – 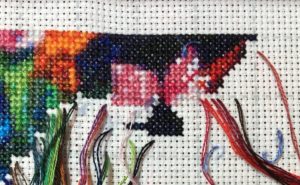 see that bit of dark purple next to the pink?

I finished later last night than normal; it was dark except for the light around my chair. And purple is purple? As it turns out – no – it isn’t. As it turns out, 3838 and 3835 are both in the purple family, and it in the same bin in my stitch bow roll. But 3838 tends toward the blue end of the spectrum and is several shades more saturated than 3835 which is definitely more closely aligned with reds. And this particular area has more than a few pinks.

So, I spent 15 minutes unpicking 12 stitches in a careful manner so as to not disturb the stitches around them. The only time previously I had managed to insert the wrong color, it was five stitches and it was fairly easy just to stitch over them. Not an option in this case.

So this is the new end result. 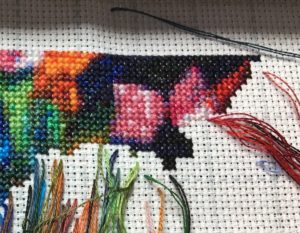 Now with the right color

Unlike in knitting where you can tink or frog (knit spelled backwards for taking out one stitch at a time or rip-it, rip-it for tearing out a whole section) I can’t find a special word in the cross-stitch community for this careful removal of a few stitches.