In the 19th Century when everyone traveled across oceans by ships you took your worldly goods with you in a steamer truck. Or seaman’s trunk. I have heard both terms used, 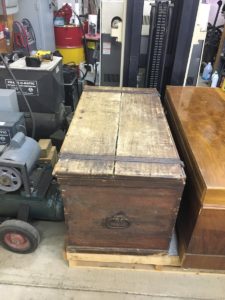 This particular old truck is rumored to have traveled from Europe to Minnesota (~1880s-1890s). It passed from my grandmother to my mother to me. It became mine in 2014. Colin moved it from Arkansas to Minnesota ~ 2007. In in he placed anything that he thought I might want. One of my purposes on this trip was to sort out all those things that really should be re-homed.

As it turned out, there were a lot of those. A few old cook-books will be kept. Some dishtowel that my grandmother hand embroidered. Several pieces of art my mother created in the 1950s. But mostly, I wanted the trunk. It is heavy planks and is iron banded. The shipping may wind up costing me more than it is worth, but that is also alright.