I mentioned last month that I was “participating” in a number of mystery cross-stitch-a-longs. Each SAL is released in segments on a regular (for it) basis. The most common interval is once a month. A few are every other week. The rare pattern gets released on a weekly basis – but this type of SAL is usually a short term project of no more than six components.

Not that you wanted to know any of that – but to avoid personal confusion, I print out a calendar each month I can write down the dates that patterns will be released. Allegedly, this will let me plan what I will stitch, when.  In reality, I am likely to go with whatever shows up first, which ever looks the more interesting, or which ever is going to be the hardest to catch up on if I fall behind.

I may just have bitten off too much, but we will see.

Anyway – today is Wednesday, 3 Feb and I have completed my first three pattern segments for the month. 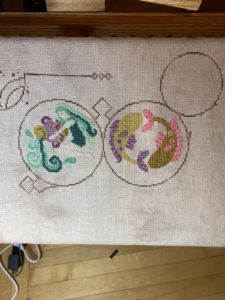 2. Second up is Dreaming Girl by Barbara Ana. This is an every two week pattern drop. Unfortunately, this pattern is not compatible with PatternKeeper, so I have no clue as to how many stitches were in this first part, but I have the feeling that it is over ½ of the total. 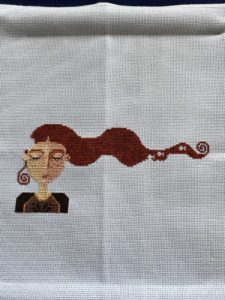 3. And I finally was able to pick up fabric for the Wonders of the Solar System by Climbing Goat Designs (no, I couldn’t possibly make this up). The first planet – Mars, was released the 15th of last month which means that I will see the next planet up in less than two weeks. Pattern Keeper compatible – 827 stitches to the Red Planet. 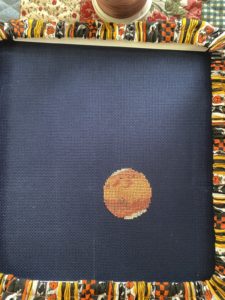 From here, I have a start (for the third time) on this year’s Linens and Threads Mystery SAL and a number of others in the queue. Progress will be made….