Let me take you back in history: a long, long time ago when I lived in Germany I bought a Pffaf sewing machine and brought it back with me the first time I lived in the DC area circa 1984. Carmen and her husband picked us up at the airport (me, Shana, a ton of luggage which included the sewing machine) and dropped us off at our new but empty house in Kensington. There was a small embroidery attachment and I had great dreams about “doing stuff.”

Over the years I added machines which included increased machine embroidery capability but never quite got the hang of it. I did accumulate a bit of thread (Sulky, Isacord, Maderia, plus a couple of other brands) which meant that I never quite had the colors or combinations that I needed and continued to add thread one spool at a time.

This past Dec I had to change sewing machine manufactures. Pfaff is no longer made in Germany but China and all the attachments weren’t going to fit anymore. I bought a Viking (which is European made) and went for the relatively high end. It can do all sorts of things including embroider. I had a variety of stabilizers, I had the software. What I didn’t have was a thread set. When I did this for Alex 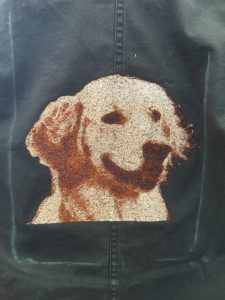 On the back of a jacket

I had to pull from five different thread lines to come up with the colors. It is not that it wasn’t appreciated – 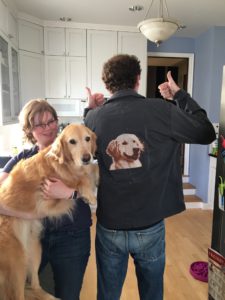 the kids, the dog, the jacket

But I really wanted to avoid the hunt and color substitution agony that was involved.

Poly is not quite as shiny as rayon, but it is very washable and color fast which is why I bought what I did. I sorted through and found I already had about 20 colors. Even so, buying the set saved a chunk over individual spools, especially since the storage boxes were included.