The view in driving from Hokatika to Christchurch went from the west coast, over Arthur’s Pass (not all that tall given my point of view from Nepal & Bhutan) and down into the eastern side of the mountain range.

You can see the change in the landscape from the lush watered west to the dry eastern slopes where the forests were cut before anyone figured out that they weren’t going to regrow. Since the top soil is now all gone, what remains is bare mountain peaks…

We flew from Christchurch – with a tram tour of the city.  Even 5 years later it is easy to see the effect of the earthquake. We were given the number of 1200 buildings in the CBD alone were damaged beyond repair plus all of those which need some repairs

and arrived in our hotel in Wellington after 2100.

There were two fun stops for the day – a sheep farm where we met Jake, his sheep and watched a shearing demo –

But the most fun was the Otira Stagecoah Hotel – which has been serving food and providing rooms since 1865. Back when the stagecoaches ran from Wellington to Greymouth, this was how you got from the capital to the rapidly expanding gold rush fields – 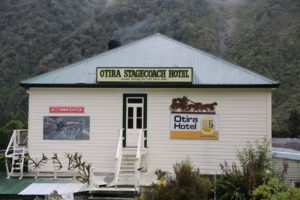 where the outside decorations were as interesting as those inside

We stopped for tea. And missed being 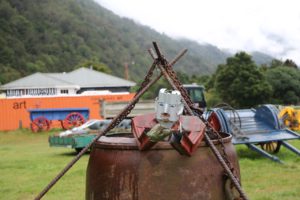