You all remember Tetris – right? The Russian origin 1984 game that addicted millions.

That fun game with blocks fall from above which had to be slotted such that you filled up layers. In most games, the layers disappeared as you filled them up with the goal being to survive for ever (as the blocks fell faster and faster) or to complete so many lines at each level…

As I started looking into the history of the game (the reasons why should be evident shortly) I was also looking at what colors were normally used in the blocks. I branched from there out to other 8-bit games of that era (meaning early 80s through mid 90s). There are seven different shapes, originally grey scale which morphed into distinct colors. Standardization of the colors did not exist for the first 15+ years of the game.

Why am I telling you all of this? Because PixelPrime decided to release a SAL based on the old 8-bit games. I was a bit floored at the size of the initial frame (17k stitches as computed by PatternKeeper).

Rather than stitch the whole frame – I decided to stitch each portion as that month’s segment was released. As it turned out -the first section started in the lower right corner. The fabric is 14 ct Aida, the thread is Sulky. 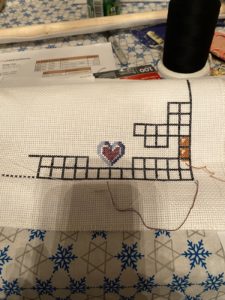 start of both the frame and the pattern –