I hadn’t heard about the number of cases of COVID linked to the first of the two cross-stitch retreat weekends in Ohio. But then I am not on Facebook and it is hardly something that organizers would want to advertise. Or maybe, if they were smart they would use it to remind people who are ill to stay home…

Well, as of yesterday morning, the same thing is apparently occurring following my weekend. So far, two of the other four at my table have tested positive as well as several other individuals as reported on FB. To say I am not thrilled is putting it mildly. Having been so careful, I really don’t want to have been sabotaged by individuals who showed up while ill. And before anyone tries to talk about asymptomatic cases…. there were more than a handful of women who spent their weekend coughing and sneezing. The sound of coughing travels….

As of early afternoon today, the count (as best as one of my table mates could figure) was 35. And that only includes those who posted to the Facebook group + my one table mate who doesn’t deal with Facebook.

No symptoms here, but going to wander over to one of the testing sites tomorrow just to be on the safe side. This particular site, run by Berkeley, also has Paxlovid on hand. Do I want to add more meds? Not particularly but if I test positive, it is a better plan than spending time in the hospital. I’m almost five months from my second booster so I figure what little immunity I managed to generate has probably waned. 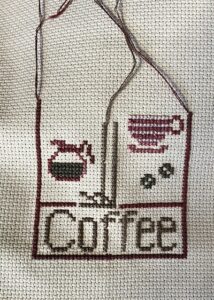 and a good portion of the day playing computer games while sulking….