As I dropped a “new” table cloth on our breakfast nook table this morning, I took a good look at the placemats. But first, the tablecloth was simple. Blue and white patterned, ocean themed upholstery fabric rescued from the bargain bin shelves at JoAnns. The bit left on the bolt, the two ends serged and it look just fine.

But now we come to the placemats. We have gone through a lot of placemats over the years. Picked up here and there. Not one set of the store bought ones have survived years, children, spills and multiple moves including transatlantics.

The two sets which have survived both date from the mid to late 1980s. (which means that they are older than 3 of 4 offspring. Handwoven – the first set was my first attempt at weaving placemats. The warp was perle cotton and the weft a cotton filler. I didn’t know much at the time with the result that I didn’t use as fine a dent reed as would have been sensible. They have become stained over the years as well as surviving multiple trips through the washer and dryer. But they still bring a smile to my face. 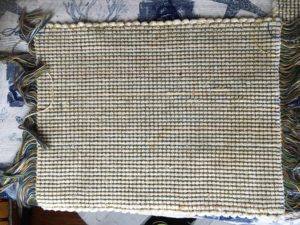 The second set is even more special. They were a gift from Carmen, woven on her rather large Gilmakra loom which took up a significant space in her Wheaton, Maryland home. There were at least eight in the set, maybe more. Since they are scattered around (table, tray, side table) I think I still have them all. 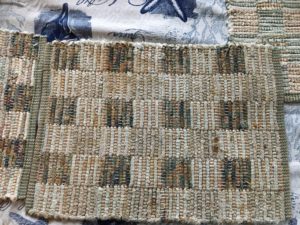 They graced the table this evening as four of us enjoyed Indian take-away. A visual reminder of enduring friendships and well made household items.