Besides schematics on a lot of flour sack towels, I have been trying various designs on terry towels. It was a while ago, but there was Felix and Felicia (bib and towels). I messed around with a couple of other patterns and dumped them on Daughter #2 who always has a need for towels. Two dogs, one a golden retriever who loves water and mud.

And then I have a friend in Alabama. She wound up there secondary to job, family, and retirement from military fun and frolic.

Her daughter loves unicorns especially those from My Little Pony. I remember My Little Pony. That set/series/whatever has been around since my daughters were young. Until I looked, I had no idea that there was more than one unicorn involved. I just remembers a white unicorn which made sense. I mean really, who isn’t familiar with Peter S. Beagle’s The Last Unicorn? The movie by that name post dates the book. I will always vote book over movie. In this case, both book cover and animated movie had white as the color of the unicorn’s coat.

So I took one large unicorn design – mostly head, horn and a couple of flowers added for accent and fought my way through the design. Not the best, but it went out in the mail. Then I tried a different design on a hand towel. I still have a couple more patterns that I might want to try. 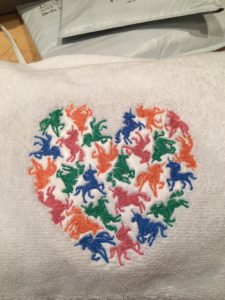 for the love of unicorns

and it is always fun to send things when they aren’t expected.