Ok, can anyone explain to me why Canada has all of its international airport codes starting with “Y”? In some cases the second letter relates to the airport city (V=Vancouver, O=Ottawa) but it is not consistent across the country in either French or English? Did they just come to the party late and take a code set at the end so as to be polite?

(and then I went and looked it up. It has to do with weather stations (Y=yes there is one) at airports, the IATA requiring 3 letter airport designations starting in the 1930s and the old two letter Morris Code designators. Didn’t have an airport? Then use your two letter code for your train station… as Edmonton did… (and a nice whole article is here).

None of that explains why this note is coming to you from Vancouver (my destination) rather than home or SFO (my originating airport).  I am taking another one of what I am calling my rescheduled trips. In fall of 2020… you remember 2020? One of the years that wasn’t? I had been planning on taking several long haul cruises and just celebrating having survived 70 years.

Fast forward to 2022. I am a couple of years old, doubt any wiser, and was still interested in sailing back to Australia. There were a couple of choices. I wound up making it on price as much as time. While I would have loved to sail from the US/Canadian West coast across the Pacific to Japan, along the China Sea and to a serious number of island countries before landing in Australia it would have been 49 days and substantially into five digits as a solo traveler. Or RCCL for 29 days, a lot less money and traveling with friends.  The second choice won.

So this will be around the world in 76 days (no, I didn’t count ’em – there is this lovely item called a Julian calendar). I am also going to keep track of transportation modes – in this case it was automobile from Berkeley to SFO, Air Canada from SFO to Vancouver and a Lyft to the hotel. I really thought about using public transportation. Seriously thought about it. Then I smartly decided that COVID recovery + luggage = fatigue and I should be smart.

Did I mention the luggage? Backpack with electronics – not light. Duffle bag with stitching, knitting, and some things for others. And a small rolling suitcase – one can not forget the clothing now can I? Staying at the Hampton Inn across the street from the Vancouver Whitecaps FC (Soccer for the US Types) stadium 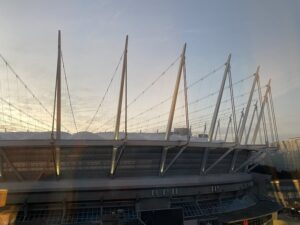 and the skyline is shiny at night… 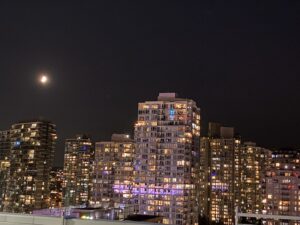 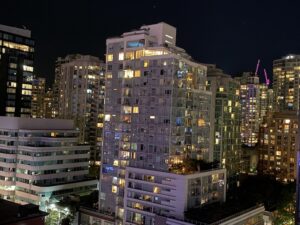