Second time was the charm

I almost labeled this post “submitted” but was concerned at the potential for extreme SPAM. Who was it that said “discretion is the better part of valor?”

After exercise class I changed before walking downtown Berkeley to catch the BART. Off at the Montgomery St Station and the few short blocks to Bush Street. Arriving more than an hour before my appointment, I had time for a cup of coffee at the cafe next door. Sitting along one of their street tables, I had a number of women, most the age of my oldest, stop to see the hat I was finishing. Down to double-points at the top, it was a matter of minutes to knit the last 20 rows and weave in the ends. 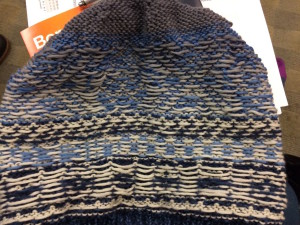 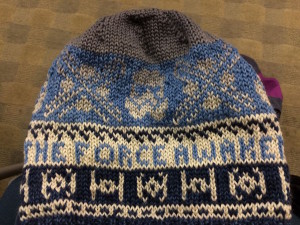 This time the process at the CKGS office went smoothly. I used their glue stick to affix my photo to the application (noting that the studio in Heidelberg had kindly smoothed away those bags beneath my eyes), took my number and sat waiting for my turn at the counter. Less than 30 minutes later I was finished.

My next stop was the post office where I mailed off a package to Chicago containing five books and a couple of hats, one of which was the “Star Wars” as mentioned above. 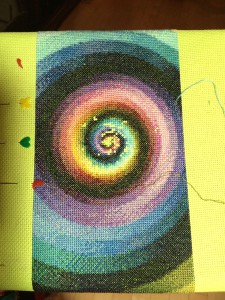 all but the last fifty stiches

fiber person - knitter, spinner, weaver who spent 33 years being a military officer to fund the above. And home. And family. Sewing and quilting projects are also in the stash. After living again in Heidelberg after retiring (finally) from the U.S. Army May 2011, we moved to the US ~ Dec 2015. Something about being over 65 and access to health care. It also might have had to do with finding a buyer for our house. Allegedly this will provide me a home base in the same country as our four adult children, all of whom I adore, so that I can drive them totally insane. Considerations of time to knit down the stash…(right, and if you believe that…) and spin and .... There is now actually enough time to do a bit of consulting, editing. Even more amazing - we have only one household again. As long as everyone understands that I still, 40 years into our marriage, don't do kitchens or bathrooms. For that matter, not being a golden retriever, I don't do slippers or newspapers either. I don’t miss either the military or full-time clinical practice. Limiting my public health/travel med/consulting and lecturing to “when I feel like it” has let me happily spend my pension cruising, stash enhancing (oops), arguing with the DH about where we are going to travel next and book buying. Life is good!
View all posts by Holly →
This entry was posted in Cross-Stitch, Travel. Bookmark the permalink.

6 Responses to Second time was the charm