and no, there is nothing in this post about sex, the government, or politics. It is my summary as I sit here with an ice pack on my wrist wondering why I wanted to put together rolling carts. It is not that I can’t do it, mind you, but why I wanted to. Did I think I was a mid-20s guy with strong hands and wrists (think Engineer Guy who is currently  in Connecticut happily working and likely playing with lasers).

Perhaps I should go back to the beginning and explain myself? Right.

Phase one was cleaning up the studio. That totally chaotic room that I had claimed as mine when we relocated to the US West Coast from Germany. I have no clue how I had planned to jam in spinning wheels, a loom, sewing machines, a serger, needlework frames and supplies for all of the above. Oh, yes, and a dress form, ironing board, some kind of working surface and perhaps the knitting machine that has been boxed now for 15 years.. 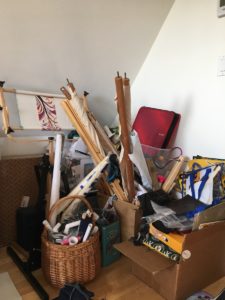 all the needlework supplies in one location 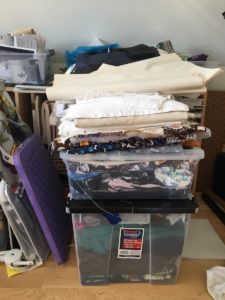 You see the problem? I also shipped a couple of plastic bin storage containers on wheels. Next I added a couple of small drawers cabinets; 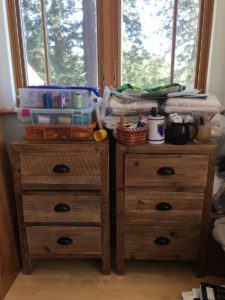 oh, yes and bookshelves – tucked those in along the wall with the worst of the slanted ceiling. As I mentioned last month,, I did a major cleanup and organize–donating several good size boxes of crafting supplies and some containers to the local arts&craft recycle shop. 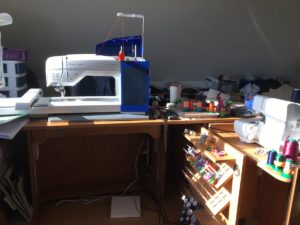 Then my new sewing cabinet arrived, which meant moving things around once again. Next on the list is getting the shelves organized, the piles off the floor and into clearly marked containers, and realistically culling. Having vertical storage seemed like a great idea in a room which has zero for closets. Hence, my purchase of a couple of carts on sale from JoAnn’s on a day which boasted discounts plus free shipping. They arrived on Saturday, abandoned next to our mailbox and had to be hauled up to the house.

Each one of these lovely little things came in pieces/parts + screws and fasteners. I can put things together – easy, peasy. If I have the tools. Several hours of searching led me to the conclusion that the red tool chest was somewhere, probably in the garage beside hundreds of kilos of other stuff. It simply was not worth spending hours excavating. Indiana Jones I am not, and we currently have the garage of doom. One day if I am feeling brave, I will share photos. Meanwhile, there I was–all those parts and me without a screwdriver.

Monday when I hauled the boxes (cursing about the weight) up to the second floor, I put together the first cart. Not that hard, just attach cross pieces to the side frames (two of them on the bottom) place this assemblage upside down on the reverse side of the top and fasten with four bolts (Allen wrench provided), turn right side up, add wheels.

Today I decided to take the plunge and buy a screwdriver. Heck, while I was at it, I bought a set since I wasn’t sure exactly what size I would need and had a sneaking suspicion that there just might be more than one size involved. Oh, was I right. Construction went something like this:

take side piece #5 and attach to back piece #7 with two screws from the bag labeled #14.  Now take side piece #6 and attach with two #14 screws to the other side of piece #7, insuring that the grove in all pieces is on the lower edge. Now slide in bottom piece #9, putting that grove to good use..

With me so far? Next attache connector #10 on the inside of each forward side piece with screws from bag marked #15. Next find that Allen wrench and use it to fasten bolts #13 through the connector to the front piece (#8) making sure that the bottom is securely in its grove. Finally, fasten drawer pull #18 to the front of the drawer (with the screws provided – magnifying glass recommended by me. 10 screws, five pieces of particle board and two bolts. I needed three sizes of screw drivers in addition to that aforementioned Allen wrench. 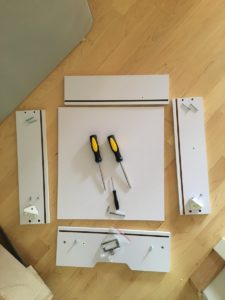 drawer ready to be put together

And that is just the first drawer. As the instructions say: Repeat steps to assemble three more drawers….. 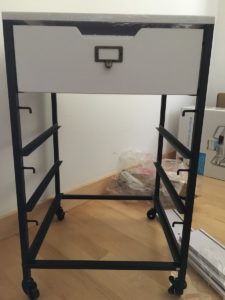 one drawer done, three to go

It took an hour. Not all that mentally challenging, just hard on my wrists. After finishing the first cart, I decided to hold off on the second.

Instead putting together a small six draw cart (metal) that I picked up at Costco today (much cheaper, FYI). The side pieces were fastened together with four cross pieces. The attachment being a bolt and padded washer on each side. Allen wrench, turn – Repeat. Pop on the wheels, tighten them down. Stand up right, slap on top, slide in baskets. Less than 15 minutes from start to finish, including loading the baskets with stabilizers and interfacings. 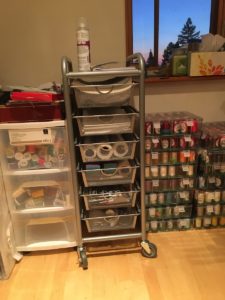 I think my fun meter is pegged.