And there were the sound of drums from Right Field last night.

I went to investigate and there they were – two of the RF Diehards complete with drums right in front of the fence in lawn seating. Several others of the group were also there augmented by a couple of the LeftField crew. It is obvious that As rules apply to Spring Training and other home team affairs, at least as it applies to noise makers. Silly as it sounds, those drum beats make it easier for me to follow the action on the field.

No banners or flags, which makes sense. The only place to post the banners would put them on the right field fence in front of the lawn which would be encroaching on the playing field. And flags? again the same and inside the lawn area no one would see them. 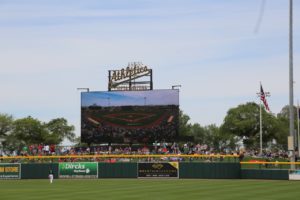 Our tickets today included food and drink at the Right Field Lounge, from before the game start through the fifth inning which really meant that food for the rest of the day was really pretty optional. 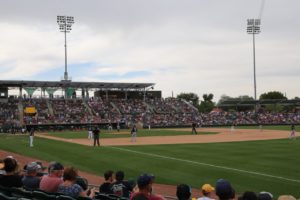 the view from our seats 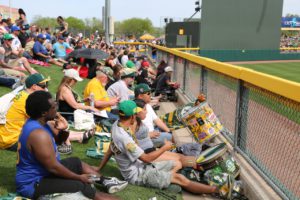 complete with an Indian’s Fan, flags, short seats and THE elephant hat routinely seen at home games. And I was wrong about the flags – they just have to be kept on the lawn side of the fence… 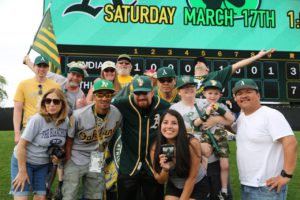 the after game shot

Oh. Yes, the As defeated the Cleveland Indians…