For those of you who don’t remember/weren’t around a few years ago – I had a six month period in which me and phones did not have a good relationship.  Other than the fact that I still put my phone down, then can’t immediately bring it to hand (AppleWatches – drive me nuts, can’t find my phone without it) – I normally don’t have huge issues.

But there was that time when first – I lost my phone down a waterfall in Iceland. It wasn’t that I planned on doing that -it was that it slipped out of my pocket while I was taking pictures. I got the pictures – but my phone, in the case with all sorts of important ID and the rest, was permanently lost. If it hadn’t been for the kindness of a fellow traveler (you know who you are) the rest of that trip would have really sucked.

So, after going through the pain of a phone replacement on return to home, I was fine till the replacement disappeared between one moment and the next while in a hotel in Kathmandu. At this point, I was kind of numb to the idea of losing things – wasn’t using my phone for internet or calls or…. in fact, come to think about it – I am not sure why I had it with me. So that was replacement #2.

The third was when I realized that the replacement phone that my dear husband picked up for me had 16gig of storage. Being someone who has been known to read books, listen to audiobooks and otherwise entertain myself – dropping from 128 -> 16 didn’t work.

Today I took the plunge and replaced my phone. For the last year, I have had serious battery issues. Having to recharge one’s phone every 3-4 hours isn’t great. In fact, it becomes a matter of always traveling with an external charger/solo charger. Not fun in the least but necessary. The new phone took a bite out of my wallet, but I had budgeted for it.

The Apple store is being careful and restricting the number of people inside. The other new policy is to not leave customers unattended for long. That means that my lovely sales person got to hang out and talk to me while we set up my new phone including updating the operating system and starting the backup to load all the information from my previous phone.

Which left having to reset passwords on all my email accounts when I got home since I didn’t remember them all. I don’t think most of us know all our passwords – depending on either a software program or other computer mechanism for tracking them. I just checked. my phone is charged, a new case ordered, email downloaded and it is back to stitching…. 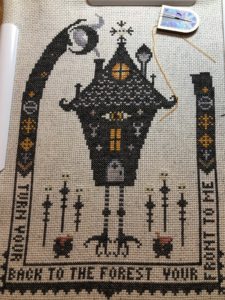 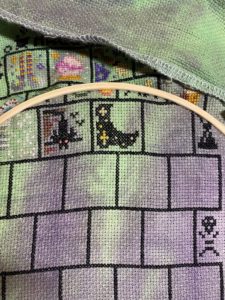 start of the dark moon 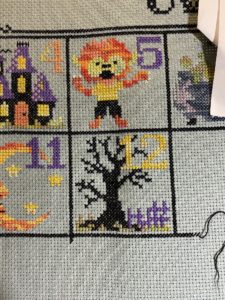