↓
Home→family→Pussy Cat where have you been?

Well, it certainly has not been to London, nor visiting a queen. This is as close to a queen as I have come 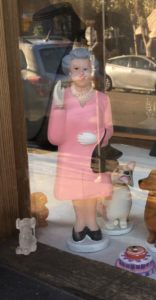 from a shop window

where she does the wave which I am sure is solar powered. The dogs (corgis?) wag their tails.

Most of the month it seems, I have been treading water – house hold chores, baseball, a bit of sewing, reading, a few puzzles, procrastinating (i.e. those papers are about at the 50% complete stage) and keeping an eye on George.

Unfortunately, starting last Thursday – that has turned into close to a full time job. We knew that his stem cell transplant had produced white cells, but not as many platelets or red cells as would have been expected to this point. An attempt to back down on the immune suppression didn’t help. His hemoglobin was way down and there was hardly a platelet to be found. That last is concerning, since platelets are ½ of the bodies clotting system. Clotting factors can do only so much without platelets to sort of plug up holes.

So Thursday he received necessary but unexpected transfusions and a request for a return visit on Saturday and Monday. Thursday evening he received a request to come back in on Friday which we managed. Then there was Saturday. And a request to come back on Sunday. (Dani pulled the Sat & Sunday drive). We did Monday, then Tues, then Wednesday which leads us to today. It has been platelets every day, plus more blood on both Saturday and yesterday.

The summary of which will be confirmed with a bone marrow biopsy tomorrow – but everyone is pretty sure that the stem cell transplant failed. Probably because he had a few white cells left which have managed to kill off the transplant. It could be that it just didn’t take. In any case, a couple of new donors have been potentially identified and are being screened.

Obviously, George is not thrilled and this drive is getting really, really old. Much harder on him than me since, instead of seeing restrictions lifted as we get close to the magic 100 days post transplant he has more treatment in the future.