As I stepped off the ship today, it was clear that I had been here before and was making the same decision as last time. Staying here in port town of ~ 180,000 was preferable to heading off to Athens for just a few hours or spending a goodly part of the day riding around on a bus to view city, sights and history through a lens only a bit more clear than a television program. 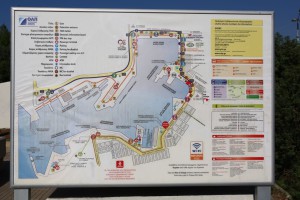 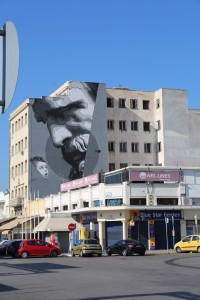 the only interesting graffiti I found

As a cultural center, one can find domed Greek Orthodox Churches every few blocks well tended in sharp contrast to many of the other buildings. I counted at least five during my 20 minute stroll from our berth to the train station. This is a port city which bustles primarily with people in transit. Cars and trucks lined up for ferries, Busses and trains brining in thousands a day while transporting away similar numbers in return. Docks and berths for ferries claim almost all the available commercial docking space in this section from which you can travel to various tourist destinations in the Greek Islands or travel further afield to other countries in the area.

Having gotten my dose of land I headed back to the ship. 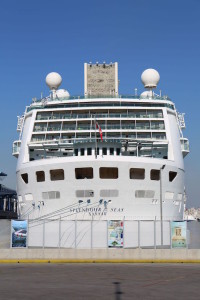 Last time I was here I , walked first to Lionshead Gate. This time I proceeded back to the terminal with my only purchase a postcard that should wind up adorning Miriam’s apartment wall with the rest of her collection.

All on board was 1630. Sundown is early this time of year. 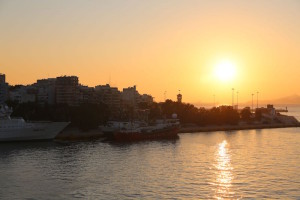