Somehow the return journey didn’t seem as long as the outbound one. The road (such as it was) even seemed familiar in a few places. We made a quick stop at the top of the pass – 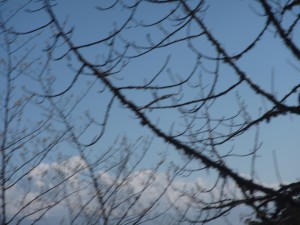 Since they were closed the other day, we made a stop in Thimphu at the Thimphu Institute for Zorig Chusum also known as the Arts and Crafts Institute. Young people can learn, in a four year program traditional skills of sculpture, woodcarving, embroidery, painting, or weaving, all with a traditional and religious bent.

The weaving student’s studio was closed to visitors ……

Back in the bus, it was on to Paro and lunch (note, this is about 1300 after an 0730 start) followed by a visit to the Fortress. Dating again from ~ the 17th Century it has been rebuilt multiple times and repaired after fires. It was a comfortable hike up the hill followed by a flight of stairs to the entrance.

oh, yes – must have a bridge across the river

a gate for entry

steps along the hike up

the larger building is the fortress

steps up into the building (yes, really. Quite steep)

Oh – did I mention the wind. Mornings are fairly peaceful. But the wind in the afternoon makes that of Chicago feel like a mild breeze. Seriously this is wind that doesn’t take prisoners, more than willing to create windchill in an otherwise lovely afternoon.

Anyway – the Fortress now houses administrative offices for the local area, a hostel for the monks who live there and mind the temple. And, 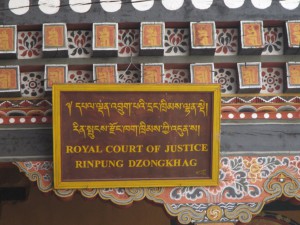 As you review the courtyard and building, I don’t think there are any US/Canadian/European Courts which have quite the same ambience.

one of the four cardinal directions

its wood, all wood

looking toward the judicial area

On the way back to the hotel we drove past tomorrow’s adventure – a hike up to the Tiger’s Nest.

see that little white dot halfway up the cliff face?

No, didn’t think so. 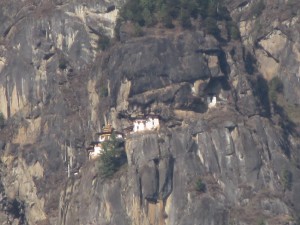 at maximum zoom on my little point and shoot. Should be interesting. We are making an early start to avoid both groups of others and wind. Total distance is about 3.5km and an elevation of 3120 meters and a measly 900 meters elevation climb. Well, actually more since we have to go up to the second rest stop to go down to the bridge, stairs and then back up. I’m taking both cameras and both lens. Tomorrow you (hopefully) will see my version of the classic tourist photos….