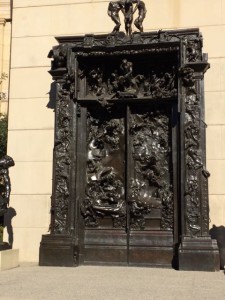 The Gates of Hell

My planned trip to Palo Alto for tomorrow was moved on short notice to today. That shouldn’t be a problem? Right? Meet up with some people, provide unsolicited input on a couple of projects and stop at a Joann’s or Michael’s on the way home. Moving it meant no chance to go and bother Alison but I am sure that can be managed at a future time.

A side note – when Universities, such as Stanford are closed over breaks this doesn’t mean that the campus is empty. It might mean that there are a lot of other people walking around looking at the place and more than the ordinary number of parents having a closer look at where their money is going. What also happens, as it turns out, is that break time is prime time for repairs and renovations making a hash out of several planned luncheon locations.

Our meeting place in the Rodin Sculpture Garden should have been my first clue but I was oblivious – contemplating going back to photo Fridays (remember 2007 & 2008?) and once again featuring all the arches and doors I have collected over the last several years.  The doors are #5 struck and remind me strongly of the Bosch painting. If I had any ambition or interest I would look up the dates on both and resolve the question.

The meeting(s) happened. I got to Michael’s and was able to track down my final missing DMC thread color.

I would share sunset photo’s with you but still have to get them off the Canon….

fiber person - knitter, spinner, weaver who spent 33 years being a military officer to fund the above. And home. And family. Sewing and quilting projects are also in the stash. After living again in Heidelberg after retiring (finally) from the U.S. Army May 2011, we moved to the US ~ Dec 2015. Something about being over 65 and access to health care. It also might have had to do with finding a buyer for our house. Allegedly this will provide me a home base in the same country as our four adult children, all of whom I adore, so that I can drive them totally insane. Considerations of time to knit down the stash…(right, and if you believe that…) and spin and .... There is now actually enough time to do a bit of consulting, editing. Even more amazing - we have only one household again. As long as everyone understands that I still, 40 years into our marriage, don't do kitchens or bathrooms. For that matter, not being a golden retriever, I don't do slippers or newspapers either. I don’t miss either the military or full-time clinical practice. Limiting my public health/travel med/consulting and lecturing to “when I feel like it” has let me happily spend my pension cruising, stash enhancing (oops), arguing with the DH about where we are going to travel next and book buying. Life is good!
View all posts by Holly →
This entry was posted in Home. Bookmark the permalink.