This came in the mail yesterday – 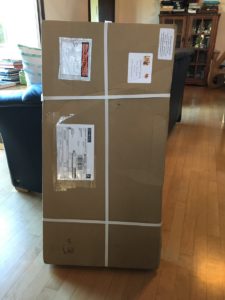 But let me back track first.

Like many people with various hobbies, I am a tool and toy junkies. Not a total and complete hoarder of same, you have to understand. I have divested myself of various bits and bobs (some of them significantly large) over the years. After all, I live with other people and they just would not understand if I took over the house for a weaving and fiber studio. So, I no longer have my Glimakra, AVL, or Harrisville looms. Sewing machines have been upgraded over the years and I haven’t kept all of the old one.

I will admit to probably having a few too many spinning wheels. In fact, when I stop and think about it, I haven’t done much in the way of spinning or knitting since the move to California. Since wool is my fiber of preference, that might make a small bit of sense. It is not all that cold here. But I “might” want them in the future. I am not counting the two that I “re-homed” before leaving Germany or the one that I gifted (along with the Harrisville and several dozen cones of yarn) after settling here.

Since moving here, I have been doing more sewing, machine embroidery, and cross-stitch. Like any other crafter, I have been accumulating supplies (aka Stash) against a future want, the apocalypse, or an acute shortage of whatever I might fancy at the moment. I don’t spend beyond my means. And I haven’t quite run out of storage space.

Anyway – for the couple of years, I have been searching for the perfect cross-stitch stand. Functional is important – and so, frankly is esthetics. I had three various stands (System-4, Lacis, and ???) which do work, for some projects, but ran into the challenge of trying to sit comfortably while stitching so that I don’t get a sore back. There is also the challenge of width of the project. The System-4 stand can adjust to quite a wide width – but it has a three point braced foot that makes it impossible to use with any kind of a lounge chair or foot stool. The Lacis stand is lovely, adjustable, and a max of 50cm wide. The ??? which I think might be a Charles Craft has split rail rods, and goes to 60 cm, but doesn’t work well with a chair/footstool combination.

All of this lead me to Hearthside Craftworks – which is a home based Calgary couple. After thinking about it from January on – I ordered a Mark 2 stand near the beginning of March. My stand went in the mail on the 20th of March, checked into the Calgary post office. And then it seemed to sit there on the tracking display for day after day after day. Suddenly on 29 March my stand showed as now being in Richmond, BC which is an area (town/suburb/whatever of Vancouver). Apparently Canada Post only logs packages in, and doesn’t log them out – so in transit can mean anywhere from the originating post office to the door of the next. On the 30th it was marked at being at customs.

And it arrived yesterday. 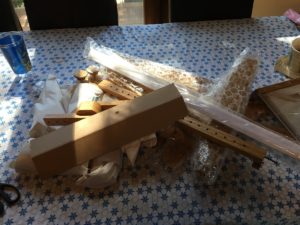 all these lovely red oak pieces

which rapidly turned into this – 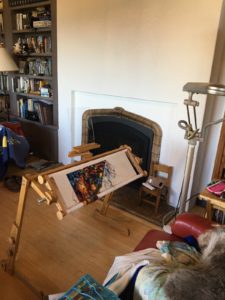 I am more than a happy bunny